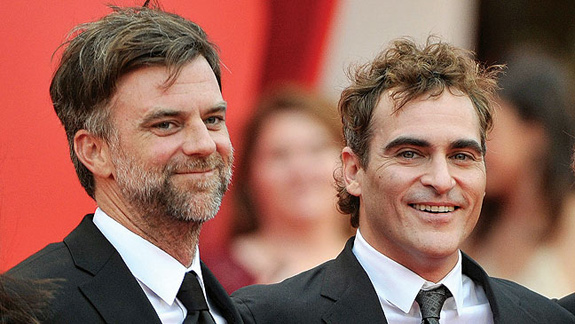 Holy shit. It's really happening. Downey Jr. out. Joaquin on his way in. This definitely takes things in a different direction and though it's a shame we may not get to see a PTA/RDJ collaboration just yet, we could not be more excited to see Joaquin have another go. (via Hollywood Reporter)


Joaquin Phoenix is in talks to reteam with Paul Thomas Anderson for Inherent Vice, the adaptation of the 2009 Thomas Pynchon novel.

Megan Ellison's Annapurna Pictures is financing the movie, which will be produced by Anderson, Ellison, John Lesher and JoAnne Seller.

Anderson wrote the screenplay based on the novel, which is set in 1969-1970 Los Angeles and centers on a pot-smoking detective on a kidnapping case. The book featured a slew of characters with quirky, original names, from Shasta Fay Hepworth and Riggs Warbling to Japonica Fenway and Adrian Prussia.

Anderson has been working on Vice for a few years. The project once had Robert Downey Jr. interested but ultimately he passed.

Phoenix starred in Anderson’s period drama The Master, based loosely on the origins of Scientology. The performance earned him an Academy Award nomination for best actor.