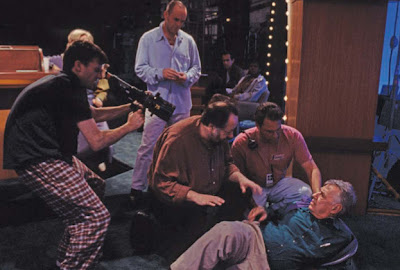 The latest issue of American Cinematographer has an interesting little article called "Tales Of Ordinary Madness" in which cinematographer Robert Elswit looks back at the making of "Boogie Nights" and "Magnolia" with Paul. No real news but a good fun read anyway and as you can see above, an excellent picture of PTA in his pajama bottoms. Highly complimentary quote from Elswit below:


“Paul is one of the few people I’ve worked with that has a poetic temperament. That allows him to do things in his films where you know the result will be more than the sum of its parts. It’s a combination of the way we shoot it and light the picture, the way it’s performed and edited, the way everything resonates with everything else.Each scene is doing more than just telling a story; it’s doing something you can’t put into words. And that puts him, I think, in the land of people like Bergman, Kurosawa, Ozu and Ford.”

You can read the whole thing if you're a magazine subscriber. (Thanks to our readers @jblots, @damitago, @mertsrocket for their help!)

All quiet on "The Master" front except for this nifty fanmade poster that recently came across our desks by illustrator Alex Fellows... unless someone closer to production than we are wants to drop us a tidbit. Our inbox is always open.

‘The Rules Of Daniel Day Lewis' By Paul F. Tompkins

We caught very funny comedian/podcaster/"There Will Be Blood" cameo-maker Paul F. Tompkins a few months back taping his comedy album at the beautiful Bell House in Brookyln. While the comedian had countless hilarious bits, two should be of particular interest to Cigs&Vines readers. One was an extended anecdote about a table read for "Magnolia" where he was seated next to the biggest movie star in the world while the other features Tompkins talking about briefly sharing the screen with Daniel Day Lewis as Prescott in 'TWBB' (which you can watch a preview of below).


Comedy Central Stand-Up
Get More: Jokes,Joke of the Day,Funny Jokes

Tompkins was kind enough to reach out to the site and let us know that his new comedy special "Laboring Under Delusions" airs tomorrow night, Saturday at 11pm on Comedy Central. If you like the special you can also purchase it at Amazon for just $9.99 which includes stuff not in the broadcast version (like his hilarious "Magnolia" table read story.) Tompkins also performs a regular show at Largo, tapes a very funny monthly podcast (The Pod F Tompkast) and should he come to your town, it would be well worth your while to check him out.

‘The Master' NOT Playing Cannes After weeks of speculation, the Cannes lineup was finally announced this morning and "The Master" was nowhere to be found. Hate to say we told you so but we assumed that May would be a little too early to let the cat out of the bag and most of you on Twitter and Facebook seemed to agree with us. We'd like to say we knew it all along but have to admit we got a little bit freaked out towards the end when we started to hear substantial rumors saying otherwise. The NYTimes profile arriving the day before the announcement certainly didn't help us sleep last night and neither did that cryptic tweet from 'Master' producers Annapurna Pictures saying only "Cannes." So what were they on about, then? That was to hint at two of their other films which are both in competition: "Lawless" (formerly "The Wettest County In The World") from director John Hillcoat ("The Proposition") and "Killing Them Softly" (formerly "Cogan's Trade") from director Andrew Dominik ("The Assassination of Jesse James by the Coward Robert Ford"). So that's settled and it looks like thankfully the Cigs & Vines team will not have to figure out last minute arrangements to France.

Well, for now. While it's still possible the film could be added as a late addition to the fest, it seems even less likely at this point. While that may be disappointing news for those readers attending, we're sure you'll have a great time anyway. The lineup features new films from David Cronenberg, Wes Anderson, Jacques Audiard, Michael Haneke and Jeff Nichols among many more. For the rest of us, there are only 175 days to go until October 12th.

Check out our "The Master" cast and follow the entire history of the project here.