Backstage Photos From ‘The Master' Emerge 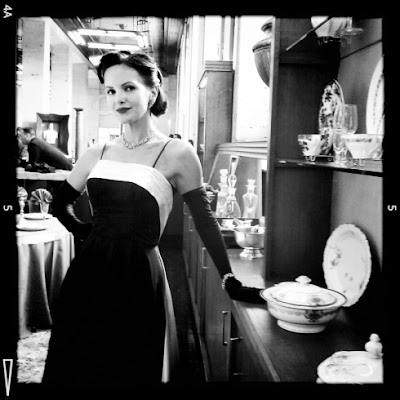 It's been quite some time since we've seen anything from 'The Master,' well those of us that aren't Emily Watson anyway. During principal photography it looked like we'd be getting frequent peeks at the goings on of the film as reports of cast and costumed extras were rolling in. But (aside from the fact that filming having wrapped up months ago) there really hasn't been a single leak since Stellar Spa took down the pics back in June. Well today, thanks to BlackBook and set photographer Jack Erling, we have another behind-the-scenes look at the film. Take a look after the jump...

Huge props to MTVNews for really using every excuse to ask people about PTA. A few weeks ago they cornered Rami Malek for some details on 'The Master' and today they've gotten a few good quotes out of Robert Downey Jr. about the rumors of their collaboration on 'Inherent Vice.' Now 'Vice' if you don't remember is an adaptation of Thomas Pynchon's novel about an L.A.-based private eye who takes on a case involving an ex-girlfriend, her real estate billionaire boyfriend and a kidnapping. Paul wrote the screenplay back in 2010 after running into trouble with 'The Master' financing and with Downey rumored to be attached, it looked as if 'Vice' had a good chance of going before cameras first.

But this was all before film saint Megan Ellison swooped in and Annapurna Pictures decided to finance both projects and Paul decided to rewrite 'The Master' and do that instead/first. Word has been quiet on the project while he's been busy on the aforementioned film so we can assume there hasn't really been any movement on it for some time. When asked about the project Downey didn't really confirm or deny but definitely seems anxious to work with Paul.


"Anything to do with Paul Thomas Anderson and I doing a movie together is probably true," Downey Jr. said. "We tend to talk about a variety of potential projects, and Thomas Pynchon's 'Inherent Vice' could be great, we'll see."

"I feel like I'm booked but I'm not. I make space for what I want to do," he said, adding that what he enjoys most about Anderson is the fact that he's talented and just darn likeable.
"I just think he's one of our great American directors, I just like hanging out with the guy."

Cross your fingers that with financing already in place and a script that should be ready to go, we won't be waiting another 5 years between films. That is of course, assuming that Paul doesn't decide he wants to rewrite it heavily or do something else entirely. (Thanks @angel_glands & Charlie for the heads up!)