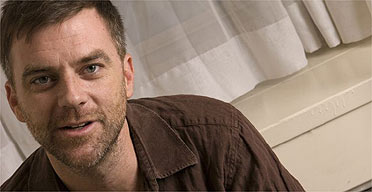 
This year we are seeing the release of his fifth feature, There Will Be Blood, and it feels like an important moment. At 37, he's no longer the precocious youth. He has proved himself to be a director of formidable imagination and ambition, but we're waiting to see what he will do with such gifts. Will he have the resources to amaze us one more time?

It has to be said that the figure of the man sitting in front of me when we meet in a hotel in New York does not generate huge confidence. Others have remarked that PT Anderson in person looks weirdly fragile for such a titan of the cinema, but today he's beyond fragile. He is a wreck. He's unshaven. His brown shirt is more crumpled than linen fashionably should be. His posture is crumpled too. When later I play the tape of our conversation back, the first sound he makes that I hear him utter can roughly be transcribed as "Ooooooh" - a guttural, heartfelt expression of pain.

But, to be fair, it is the morning after the premiere of There Will Be Blood and PTA is, by his own admittance, worse for wear. Even so he is swaddled in an almost visible happy glow. The previous night, he tells me, represented the fulfilment of a childhood dream: to have his film shown at the New York Ziegfeld cinema. "I'd always wanted it, dreamed about it. It's a palace, a great old movie palace. I dare say we won't be making a big oil epic any time in the future and you think, 'Fuck! Hopefully it can play in a place like that.' It was massive, and we turned it up real loud."

What he describes as his "big oil epic" has been making waves even before it opened in America on Boxing Day. The LA Film Critics Association gave it four awards including best picture and director, and it has been nominated for two Golden Globes. Not bad going, I say, in an attempt to cheer up the suffering figure before me. "Yeah, you get it into your head that they don't matter, but then they give these awards to you and you love it," he says.

The inspiration for There Will Be Blood came to him a few years ago when he was in London. He says he had been feeling homesick for California's San Fernando Valley where he grew up and which famously forms the backdrop to all his earlier films. He had started writing a script about two warring families - a conceit that he liked, but he was struggling to know how to develop the story. He was browsing in a bookshop in Covent Garden when he saw a book with the word Oil! in bright red letters on the cover. It was the 1927 novel by Upton Sinclair set in California at the turn of the century among oil prospectors scrambling to buy up the fields. It rang instant bells with him; not only as a piece of his own local history, but as a perfect backdrop to his story about fighting families.

The result is a film that certainly does amaze, and bears several of the PTA hallmarks: breathtaking confidence, a love of acting and of visual beauty, and an exceptional grasp of the art of storytelling. Yet it confounds too, though Anderson, ever the director to avoid pigeon-holing, dislikes the description of the film as a departure. "Oh, fuck, no!" he says. (There are a lot of four letter words in the course of a PTA conversation, you just have to accept that.) "Don't depart just yet! There's nothing worse than somebody saying I want to do something that's a departure."

One of the most obvious contrasts with his earlier films, apart from its glorious outdoors setting in the open desert of Texas (California is too concreted over to provide its own setting), is that There Will Be Blood is more overtly engaged with politics than his previous films. I ask him how could a movie centred on the clash between an oil prospector's desire to make it rich and a evangelical pastor's spiritual attempts to stop him be anything else?

"Of course, I'm no dummy," he says with a slight warning growl. "But there's a trap you can fall into. If you set out to make a movie about oil and religion I'm not sure you wouldn't crash the car. Fuck! It's a movie first. You have to put on a good show first, I think."

At the centre of his efforts to put on a good show is the mesmerising performance of Daniel Day-Lewis, whose tour-de-force portrayal of the rags-to-riches oil man, Daniel Plainview, has to put him in the running for an Oscar. Day-Lewis conjures up a character of primeval energy, driven by greed and hunger for power, yet capable of tenderness as well as brutality. Anderson heightens the effect by letting the camera linger on the actor long beyond the point that most directors would shout "Cut!" The opening of the film is even more audacious than Boogie Nights - for the first 15 minutes or so, no word is spoken as we watch Day-Lewis frantically dig his mine shafts, his face blackened as though he were sweating oil.

I ask Anderson what it was like working so intimately with one actor - an experience quite at contrast with the ensemble approach with which he made his name. "At best it feels that you are connected to each other. You are completely playing the same tune. There's this kind of line between myself and the camera and Daniel that's pulled tight. When it was going well it felt just like that.

"We're still trying to figure out who the girlfriend is and who the boyfriend is in this relationship. When we first met I called him a few days later and I left a message saying: 'It's your girlfriend.' It feels like that. You are in a relationship with someone so intimate, every single day. I dare say there were moments when our spouses were jealous."

There is a good deal of classic American cinema in There Will Be Blood, partly perhaps as a result of the fact that Anderson compulsively played and replayed John Huston's 1948 gem, The Treasure of the Sierra Madre, as he was writing the script. He set himself the challenge of attempting to make a film as simple and direct as that, saying to me that he felt that in his previous films he had never quite managed to achieve economy in storytelling.

"Tell the story! Tell the story! That's what I saw in The Treasure of the Sierra Madre. The films that I love are very straightforward stories, like really old-fashioned stuff. I've never been a fan of whimsical or confusing storytelling." With There Will Be Blood, he says, "it was such a great feeling - cutting things out, slashing away. I didn't have any desire I might have had 10 years ago to shoot every single word that I wrote."

That ability - to slash away - comes with experience and growing confidence, I suggest, and he responds eagerly: "I think so, yeah. That's definitely what it is. You feel more comfortable in your own skin and learn that omitting things is the same as writing things."

Before we end I tell him I feel duty bound to ask him who he wants to work with next, because when the Guardian asked him the same question in 2000 he uncannily replied: Adam Sandler and Daniel Day-Lewis. Would he stare into his crystal ball for us one more time? "I'd like to work with Daniel Day-Lewis again," he says, forcing me to tell him that's not allowed. On his second attempt he says: "I'd love to work with Phil [Seymour] Hoffman again, and at some point Robert De Niro. That's as good as they get, right?"

And what kind of film does he have in mind? Has he another itch that he needs to scratch? "I'm already scratching," he replies. "I'm thinking: 'That's enough of that, get back to work! Let's go!'"