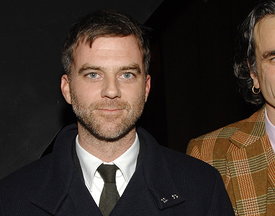 
With dollar signs in his eyes, "There Will Be Blood"'s Daniel Plainview (Day-Lewis) travels with his young son H.W. (Dillon Freasier) to Central California in search of oil riches. In the modest, dusty town of Little Boston, they settle on the ranch of a local family living atop what may be an ocean of black gold. Equally ambitious and opportunistic is the family's eldest son, emerging Pentecostal evangelist Eli Sunday (Paul Dano), who quickly finds himself competing with Plainview for the hearts and minds of the townspeople.

Asked about some of his cinematic influences, during a Q & A with noted critic Annette Insdorf along with Daniel Day-Lewis last week at New York City's 92 Street Y, Anderson cited both John Huston's 1948 film "The Treasure of the Sierra Madre" and George Stevens' 1956 film, "Giant." Huston's own voice may have inadvertently permeated the character created by Day-Lewis for the film. An even stronger link is the fact that Anderson filmed "Blood" in Marfa, TX where "Giant" was shot.

While struggling with the screenply for "There Will Be Blood," Anderson said that he came across "Sierra Madre," admiring the "economy" with which the story was told. Calling the film a "buoy in the night," he said, "I needed a foothold and when I came across it again, it was a lifesaver."

in conversations about his new film, Paul Thomas Anderson has emphasized the collaboration that drove the film. Settling comfortably into an old-fashioned armchair for the indieWIRE interview, he offered background on "Blood," discussing his work with some of the movie's key collaborators, including lead actor Daniel Day-Lewis, production designer Jack Fisk (a regular collaborator with Terrence Malick), frequent Robert Altman editor Dylan Tichenor, cinematographer Robert Elswit, who has worked with Anderson on all of his films, and first-time film composer Jonny Greenwood from Radiohead. The film was produced by Anderson's regular partners JoAnne Sellar and Daniel Lupi.

For his California story, P.T. Anderson wanted to shoot the film in his home state, but couldn't find the right undeveloped landscape. Looking for, "what Bakersfield would have looked like before the discovery of oil," he ended up in West Texas. Detailing the importance of the setting, Anderson recalled walking around the 50,000 acre Marfa ranch they found, literally planning where to build his town, surveying the land and nailing a stake with a red flag into the ground when he decided where to construct houses, a church and an oil derrick for the town of Little Boston. The ranch even had requisite train tracks. With the exception of the derrick, the structures -- erected over the course of three months -- still stand, and were constructed as four-sided, actual buildings, rather than movie set facades.

P.T. Anderson, who exudes confidence first and foremost as a writer, explained that he was still working on the unfinished screenplay for "There Will Be Blood" when Daniel Day-Lewis signed onto the project. In the two years before production actually commenced, the director recalled an initial resistance upon receiving a tape of Day Lewis performing his distinctive character. He eventually came around.

"It was terrifying, even as much as I looked forward to working with Daniel and trust [him]...," Anderson recalled about bringing Day-Lewis into the process, Once the actors and others were on board, P.T.A. explained that he had to take off his writer's hat and focus only on orchestrating the execution of his script. The process begins and ends with the writing, Anderson noted in an interview with Charlie Rose last week, explaining that if the script is good, directing can be easy. But once he and his collaborators are on set, "The writer really gets left at the door," he added, because, "nine times out of ten, [any] problems are with the writing."

Reflecting on his recent work as the stand-in director for major filmic influence Robert Altman on the set of the maverick's final film, "A Prairie Home Companion," Anderson told indieWIRE that he learned to "hold onto stuff" and not always give his collaborators the immediate answers they desired. Sometimes not answering their questions resulted in the best results, he found. But, in the conversation with iW, and then again the next night during the lengthy Q & A alongside Daniel Day-Lewis, P.T. Anderson reflected on that "terrifying baton hand off" that took place when he began to bring people into the world he was imagining.

A good example of that came near the end of the process when Anderson developed the music for the movie. A key element that literally sets the tone for his film is Jonny Greenwood's evocative score that opens the movie with an extended high pitched blare, jolting the viewer from the get go. The music carries the viewer through an extended, otherwise silent sequence depicting Plainview's early efforts to find oil. A bit tentative initially, Greenwood went away to create music, ultimately delivering two hours of work for the picture.

Concluding the conversation with indieWIRE, Anderson marveled at the arc of of a project like "There Will Be Blood" that began with his solitary period as a writer, grew to include the many collaborators and then, once shooting was complete, left the film in the hands of just a few people. He said that structure reminds him of the shape of a Christmas tree.

"You know, when you're making a film you start with all these collaborators," Anderson said in notes on the film, "And in the end you come down to just three people - the director, the composer and the editor -- holding this work together."
Posted by modage at 12/24/2007 12:37:00 PM