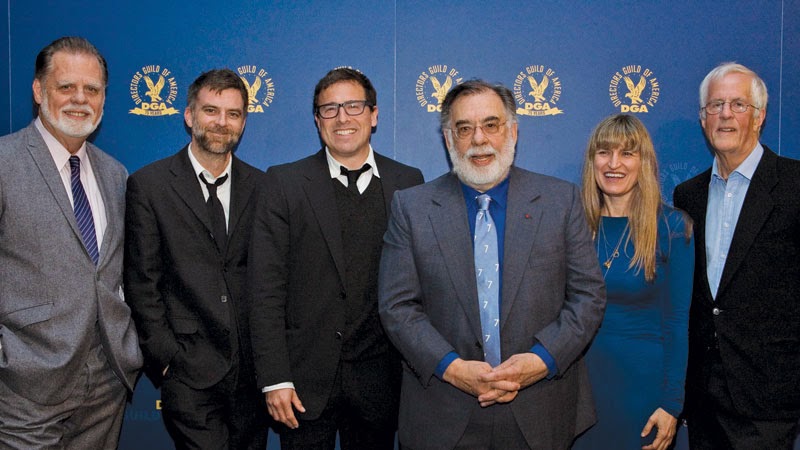 Back in March of 2011, when Paul Thomas Anderson was in pre-production on The Master, he and fellow filmmakers David O. Russell (The Fighter, Silver Linings Playbook, American Hustle) and Catherine Hardwicke (Thirteen, Twilight, Red Riding Hood) sat down at the Directors Guild of America to discuss the career and influence of one of America's most important filmmakers, Francis Ford Coppola.

You can watch the full, 90-minute talk here.

With each director selecting clips from Coppola's career to showcase and then discuss, PTA presented scenes from 1974's The Conversation and 2007's Youth Without Youth - the latter of which he would go on to accredit as influential in his decision to hire Coppola-veteran Mihai Malaimare Jr. as cinematographer on The Master. Though the talk is fairly evenly spread out between the four filmmakers, PTA had some interesting remarks to make when asked about Punch-Drunk Love by Coppola. That part of the talk comes in around 26:27.

FRANCIS FORD COPPOLA: Did you know what you were doing when you made Punch-Drunk Love?

FFC: And do you notice as years go by, people say, "I love that, that was so beautiful! That was so unique!"

PTA: Yeah, no, and I thought... it turned out that everything I thought was terrible was really good. Just with some distance, it felt good. And then I edited it together, and I thought, "I think I made a film that every single person is gonna see, and it's gonna make like 500 billion dollars, you know? I finally did it!" And no one saw it, and people didn't like it, but...

FFC:  I mention it because each of these wonderful directors each has made a film, if not more than one, that's one of my favorites. And Punch-Drunk Love, not to mention the others and certainly Boogie Nights, but... when I go to the movies, I like to go out and say, "I never saw anything like that." That's my favorite thing to say, you know? And that leaves you - that filmmaker - in a tough spot for a while, you know? It tends to come around, though.

If you have the time, we highly recommend sitting through the whole thing. There are many interesting anecdotes from FFC's career, notes on his technique, and, perhaps most importantly, perspectives from three prominent filmmakers who have been deeply influenced by him.

Special thanks to Cinephilia and Beyond for the news.