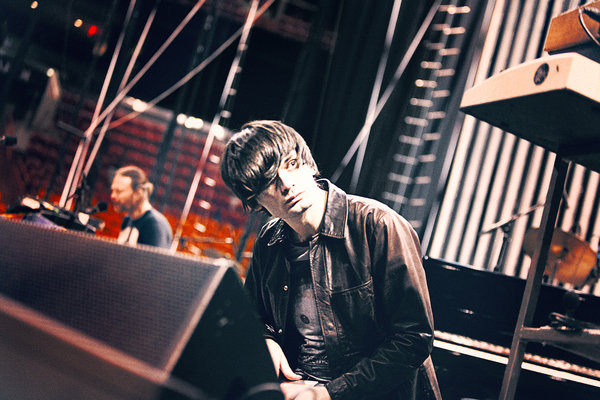 We're running a few days behind here because of a certain Austin festival but the NYTimes Magazine recently posted a nice long article on Radiohead guitarist Jonny Greenwood. Greenwood discussed how his initial collaboration with Paul came about for "There Will Be Blood," with Paul adding some comments of his own. (He speaks!) You can find most of the relevant info on page 6, quoted below:

In 2003, he composed his first film score, for Simon Dummell’s documentary “Bodysong” — some classical stuff, some guitar, some oddball hip-hop beats, even some honking, sideways jazz. It opened up doors and got him the residency at the BBC, during which he wrote pieces like “smear” (2004) and “Popcorn.” Elements of that last piece, which had its premiere in 2005, turned up in the score Greenwood wrote for “There Will Be Blood,” Paul Thomas Anderson’s epic film about the moral decay of an early-1900s oilman.

Greenwood, who went on to score movies like Tran Anh Hung’s adaptation of Haruki Murakami’s “Norwegian Wood” and Lynne Ramsay’s “We Need to Talk About Kevin,” is currently writing music for Anderson’s next film — an untitled period piece about a charismatic, L. Ron Hubbard-esque religious leader played by Philip Seymour Hoffman.

When I ask Greenwood, who’s almost pathologically self-deprecating in conversation, how his initial collaboration with Anderson came about, he says, “Well, that was Paul getting this bootleg recording of the orchestral concert, putting it against the film and deciding to use it, and then asking for more written like that. So, yeah.”

Anderson tells the story a little differently. Even before he saw “Bodysong” at a film festival in Rotterdam, he says: “I knew there were arrangements that he had done within those Radiohead songs that obviously said he could do more than just play guitar in a band. And I thought, If the opportunity arises, I bet he could do something interesting on a film score. I was just sort of waiting for the opportunity.”

As for what Greenwood said about “Blood,” Anderson laughs. “Yeah — he likes to say that. And I like that about him. That’ll never be beaten out of him. It’s a lot of head-scratching and, like, ‘Oh, I really don’t know if I can do this,’ or, ‘No, I can’t do this,’ or even, y’know, ‘I just shouldn’t do this.’ And then the next thing you know, you have an e-mail with like, 45 minutes of music in your in-box, and it’s all amazing and wildly different and terrific. That’s kind of him in a nutshell: ‘No, no. I really can’t. I don’t know how to do this.’ And then you get this huge platter of stuff.”

Although “There Will Be Blood” will probably be remembered by people who never saw it as the source of the goofy Internet meme “I drink your milkshake” — the way pop culture has reduced “The Shining” to “Redrum” and Jack Nicholson saying “Here’s Johnny!” — “Blood” is one of the great movies of the 2000s, a work of historical fiction that presents the lust for petrochemical riches as a kind of American original sin, and a horror movie with a human monster at its center, the prospector-turned-oil-baron Daniel Plainview (Daniel Day-Lewis). And Greenwood’s music is as crucial to the story as disco and “Sister Christian” were to “Boogie Nights.”

The first 12 minutes of the movie have no dialogue — we watch Day-Lewis digging for silver in a filthy hole while the strings from “Popcorn Superhet” shriek and buzz menacingly, establishing right away that we’re looking at elemental evil. Yet Anderson says that when he screened the sequence for Greenwood without music, “he was jumping up and down, saying, ‘Oh, you’ve got to do it that way.’ ” (The director eventually overruled his composer: “It really became a question of how European we wanted to get,” Anderson says.)

All told, Anderson estimates, Greenwood gave him about 90 minutes of new music for the movie. But because the final version of the score mixed that material with bits and pieces of “Popcorn” and a cut originally written for “Bodysong,” Greenwood’s work was ineligible for the Academy Award for Best Original Score, because of strict bylaws excluding “scores diluted by the use of tracked themes or other pre-existing music.” (The rule was also famously invoked when the Academy was forced to withdraw the composer Nino Rota’s nomination for “The Godfather” in 1972 upon learning that Rota had recycled some music he wrote 15 years earlier for an Italian film called “Fortunella.”)

“Yeah, we got maneuvered out of the big one!” Anderson says. “I just wanted to see Jonny in a tuxedo. I would have paid top dollar for that.”

The pair stay typically mum on 'The Master' which we now know should hit in October. Stay tuned to Twitter and Facebook for the latest news and updates. (Thanks Grant for the heads up!)
Posted by modage at 3/14/2012 05:35:00 AM

Email ThisBlogThis!Share to TwitterShare to FacebookShare to Pinterest
Article Mentions: jonny greenwood, paul thomas anderson, the master, there will be blood