Scene By Scene Breakdown Of ‘The Master' Cannes Footage 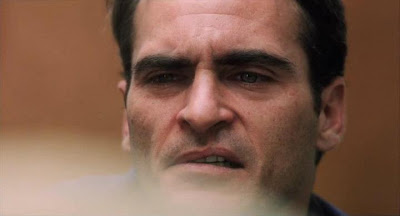 To say that yesterday was a big day for the site would be something of an understatement. It was the day that we and many fans have been waiting on for years, as we got our first look at the 6th film from Paul Thomas Anderson. First, we got another little note from Paul with the first teaser trailer for "The Master" (which was cut by PTA himself) and a few short hours later the reactions started pouring out of Cannes to the 4 minutes of footage at the Weinstein Co. presentation. Today, thanks to Hitfix we have a scene-by-scene rundown of the entire presentation (as if it were possible to be any more excited).

If you saw the trailer earlier today, you have some idea of what we saw, but it was a different assembly.  While the soundtrack was the same at the beginning, with that unnerving Jonny Greenwood score and the interview between the Army official and Joaquin Phoenix, the images themselves were different.  We saw Phoenix standing in a hallway, writing on a piece of paper affixed to a corkboard.  As the interview reached its end, the camera pushed forward so we could read the very short and direct note:  "Gone to China," and then his signature.

We saw the same footage of the fight on the beach, the footage of him drinking the alcohol that looks like it's coming from a torpedo, and then the close-up of him sitting across from the guy that's interviewing him.  "What happened?  Sir?"

"Let's just see if we can't help you remember what happened."

Then began new footage.  Joaquin Phoenix running across a field, afraid.  Him on a boat, walking along a deck at night.  And then his first encounter with Philip Seymour Hoffman.  He asks Hoffman, "What do you do?"

"I do many many things.  I am a doctor, a writer, a nuclear physicist, a theoretical philosopher.  But above all, I am a man."

Then Amy Adams is introduced, and she's got a crazy intensity, even in these short clips, that practically radiates off the screen.  "This exercise will help you with your concentration.  Look at my eyes.  I want you to place something in the future for yourself that you would like to have.  It's there, waiting for you."

Then it's back to Hoffman and Phoenix, sitting across from each other in some intense encounter, Hoffman challenging him.  "Say your name."

"Might as well say it one more time, just to make sure you know who you are."

We see a group of people shooting on the beach, Phoenix among them, and then we see Adams confronting Hoffman, almost in tears.  "And this is where we are at," she says.  "At the lowest level.  To have to explain ourselves.  For what?  For what we do, we have to grovel.  The only way to defend ourselves is to attack.  If we don't do that, we will lose every battle we are engaged in.  We will never dominate our environment the way we should unless we attack."

Now we appear to be jumping scene to scene, moment to moment.  It's just impressions.  Adams laughing, out of control.  "It's a grim joke."

Hoffman groans.  "I was thoughtless in my remarks."

As the scenes cut from one to the next, we keep returning to a haunting image of Phoenix, framed in a window, punching himself in the head.  Fast.

Hoffman accuses him.  "You linger in bus stations for pleasure."  Another shot of Phoenix, punching faster now.  Back to Hoffman.  "Is your life a struggle?"  Punching faster and faster.  "Is your behavior erratic? Are you unpredictable?"  Phoenix, sitting across from Hoffman, farts loudly and begins to laugh as Hoffman recoils.  "What a horrible young man you are."

It seems like they're picking at him, breaking him down.  "You're a dirty animal who eats its own feces when it's hungry."

We see them meeting, talking about Phoenix.  Amy Adams in particular doesn't seem to trust him.  "I wonder how he got here and what he's after.  Is it really all so easy that he just came across us?  He's dangerous and he will be our undoing if we continue to have him here."

Hoffman's not convinced, though.  "If we are not helping him, then it is we who have failed him… is it not?"

Adams is the last one to speak as the title comes up.  "The Master."  Simple white letters on a black background.  "Perhaps he's past help.  Or insane."  And the Greenwood score ends on a lone violin, mournful.  It was a dizzying piece of footage, and much of it was just close-ups against stark black backgrounds, these great actors and their faces and nothing else.  It certainly made me eager to see what PTA has been up to, and it also pretty much confirms any report that tied the film to the origins of Scientology.  While they may not be doing a straight biopic of L. Ron Hubbard, if you're familiar with his life, it would be impossible not to see him and his wife and the early followers in what we saw tonight.

Head over to the site to read more. (via xixax) According to Harvey Weinstein, the film is "nearly finished" which would indicate that the pics Paul sent us last week were not archival. (via Deadline)

Check out the photos from the teaser in our Facebook gallery and stay tuned to Twitter for the latest news and updates.
Posted by modage at 5/22/2012 05:02:00 AM