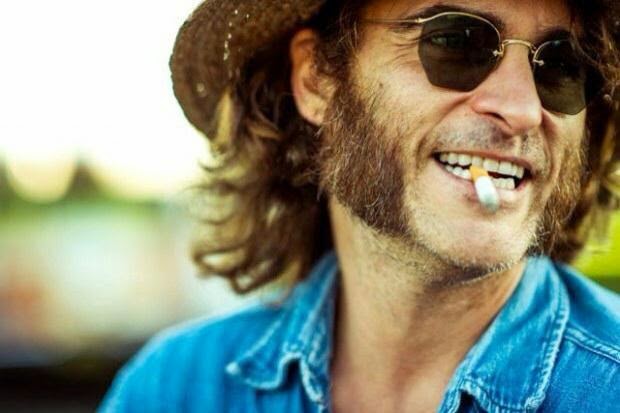 We tossed this up on our social media outlets but were a couple days late to getting it on the ol' site, so here it is: Kent Jones, the director of the New York Film Festival, where Inherent Vice will premiere in 42 days' time, has shared a brand spankin' new photo of Joaquin Phoenix as Doc Sportello, which you can see above. In addition, he went on to reveal the personal response he had watching the film.

On the selection process...


I saw that there were a lot of good movies from American filmmakers. First of all, three great New York movies: Time Out of Mind, Heaven Knows What, and Whiplash. Then there’s Birdman, which is another kind of great New York movie, and a great Broadway movie by the way and a beautiful movie about theater. And then there's Gone Girl and Inherent Vice. Gone Girl is this panoramic, phantasmagorical, acid trip of a movie that keeps shifting gears for an amazing cinematic ride. Inherent Vice is also, in a completely different way. It’s like being in a time machine, going back to the time of mutton chops and Neil Young.

On watching Inherent Vice for the first time...


Wild movie. You know, it’s the first [Thomas] Pynchon film adaptation, and it really catches his tone. It really catches the antic nature of him: the crazy names of characters, the nutty behavior, and then also the emotional undertone. It has the flavor of Pynchon. It has this Big Lebowski element to one side of it, but the emotional undertone, the desperation, the paranoia, and the yearning in the film... [Paul Thomas Anderson's] an absolutely amazing filmmaker and it’s incredible to see him responding to someone else’s creation and then building his own creation out of it. He sort of did that with There Will Be Blood, but not really. It’s his own movie, inspired by the novel Oil!

I was born in 1960, but I certainly remember 1971 very well and I gotta say, from the minute the movie started to the minute it ended, I was back—way back—to the point where I was thinking “Gee, my son was born in the ’90s.” So it’s a different kind of relationship that he would have. It’s an amazing piece of work, and at this point Joaquin Phoenix and Paul have something so rare between them as an actor and director, and Sam Waterston’s daughter, Katherine, is in it, and she’s riveting every minute she’s on screen. It’s quite a film.

Find more information about the film on our Inherent Vice page.
Stay tuned to Twitter and Facebook for the latest news and updates
Posted by Bryan at 8/23/2014 11:20:00 AM