WATCH: 12-Minute Behind the Scenes Doc From The Set of Inherent Vice, "Chryskylodon Blues" 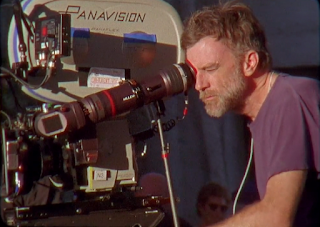 When we spoke with writer/director Laura Colella about her film Breakfast With Curtis, she told us that she had been tapped by Paul Thomas Anderson to shoot the behind-the-scenes material for Inherent Vice. But with the blu-ray release of Vice having come and gone with none of that footage included, we figured we would be left scratching our heads for the rest of our lives wondering what the hell that set actually looked like. Not so fast...

It's a spellbinding twelve-minute reel of Super 8 footage from the set of PTA's seventh feature film, scored to music from The Growlers (the band cast as The Boards in the movie) and audio passages from the novel. It is especially cool to watch PTA & co. set up shots that have gone on to become some of the more iconic of the movie, as well as shots that never made it into the movie.

Very special thanks indeed to Laura Colella for bringing this to us to this morning!