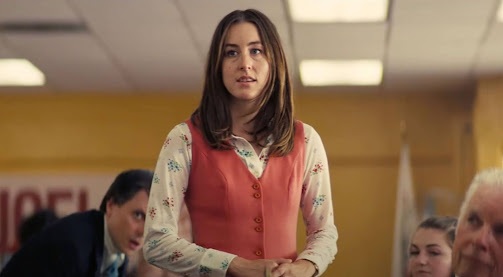 Well, we are suddenly only a handful of weeks (!) away from audiences seeing Licorice Pizza for the first time, and you know what that means: interviews!

This week, Alana Haim sat down with PTA-mainstay John C. Reilly for Interview Magazine to discuss the project and the process of working with Paul. The entire thing is well worth a read, but here are some highlights:

REILLY: I’ve known Paul since before he directed his first movie, and he’s always been very private and very paranoid. He prefers to be the mysterious wizard behind the curtain of all his movies. I’m sure his face is twitching somewhere right now knowing that we’re even talking about him. When I came to visit the set, and learned that all his kids were in the movie, and that you would be in it, it felt like he’d decided to say, “Fuck it, this is the truth about me.” How did you come to be in the film?

HAIM: It might be the COVID of it all, but it’s hard to say how it happened. I remember when he emailed me the script. I assumed that if he sent it to one Haim, he sent it to all three. I fell in love with the story, especially being from the Valley. I read it three times the night he sent it to me. I think I stayed up till five in the morning with it. Later, when I actually asked my sisters what they thought of it, they were like, “What are you talking about?”

REILLY: I’m an old dog, and when I did my first movie with Paul, he was the youngest person on set. It’s a beautiful thing that now, a new generation of people are carrying on the tradition of creating these special visions of his. But blah blah blah, enough about Paul. Let’s talk about Cooper [Hoffman]. You two really bonded during this film. Did you feel like you were two soldiers in the trenches who connected because of the extreme danger of their situation? I felt this way about Cooper’s father, Philip Seymour-Hoffman, when we did True West together. We had each other’s backs every step of the way.

HAIM: That was me and Coop, for sure. Neither of us had ever acted before, so of course we had anxieties about everything. We called each other every night, saying, “We’re the worst. What are we doing?” Having this experience with him was the biggest gift. Plus, the second that we read together, it was like, “Oh, it’s over.”

REILLY: Those videos Paul made of you and Cooper screen testing were adorable.

HAIM: I am terrified of the Beatlemania that is coming for Cooper when this movie comes out. I told him, “Now you have three older sisters that are rooting for you.”

REILLY: That energy really transfers from you into your character. I felt melancholic after watching the film, even though it’s about a very sweet and innocent relationship. I think I felt that way because your character is really at sea in so many ways. She’s constantly looking for certainty about something—about anything—but she can’t find it. I remember that feeling when I was young. I would adopt the views of people I admired just to have an opinion. You mentioned feeling untethered and adrift from your family during this experience. Do you feel that way in life? Or can you say, “I know who Alana is, and I know what she likes”?

HAIM: I obviously have many similarities with my character. I’m about to turn 30, and I’ve been reflecting a lot on my early twenties, which is my character’s age in the movie. I had no idea what I was doing. I had a job, luckily, but performing for a living is so insane, and involves so much rejection. I couldn’t tell if what I was doing was fulfilling, or if it would do good in the world. In your twenties, you’re being pushed and pulled in so many directions.

REILLY: It’s intense to be loved by Paul in that way. Even though you don’t feel like you’re capable of something, he seems to believe it. I know how it feels to have Paul as an audience, and I don’t think it gets much better than that.

HAIM: I never in my life would have thought I would be in a movie. When we finished shooting, I told him, “You saw a side of me that I’d always hoped would come out one day—finding my independence, doing something on my own—and you brought it out of me years before I was ready to do it.”

REILLY: Do you know how hard it is to give the performance that you gave, especially when feeling that way?

HAIM: It’s like a universe thing—two characters meet, and their lives change. That’s how I feel with Paul and Cooper. I met them, and my life was changed. That’s what the whole movie is about.

REILLY: When Paul sent me that first screen test, I was like, “Dude, if you can keep them feeling this free, I think you’ve got a movie.” You know the phrase, “You can’t take your eyes off her?” I’ve experienced that feeling before, watching a fireplace or a baby, but rarely with adults. When I visited the set, I remember sitting there and being glued to the monitor, even between takes. I turned to Paul, and I was like, “You can’t take your fucking eyes off her.” He looked at me like, “Right?”

Also last week, Alana Haim spoke to Vanity Fair about the forthcoming movie and that can be found in its spoiler-free entirety here. Some fun take-aways:

BELIEVE IT OR NOT, Alana’s mother was also Anderson’s grade school art teacher. When the Haims told the director that, “he went into his son’s room and brought out a painting of the mountain from Close Encounters of the Third Kind. He had painted it with my mother and then kept it all these years. And he was like, “I loved your mom. I can’t believe you’re Miss Rose’s daughters.”

ACTING WAS NERVE-RACKING: “Everything was so big, and I was so tiny.” But Anderson was her cheerleader. “Every time I ever felt like I couldn’t do anything, he was like, ‘You got this. Trust me, you got this.’ ”

THE HIGHLY SECRETIVE film is about “an unlikely couple that change each other’s lives in crazy ways. It’s really fun.” Alana’s costar is Cooper Hoffman, son of Philip Seymour Hoffman, who is also making his acting debut. The pair first met four years ago, when Anderson asked Alana to babysit a then 14-year-old Hoffman during a trip he made to L.A.

Finally, Chicago's Music Box Theatre yesterday blasted out that they will be showing a 70mm blow-up of Licorice Pizza when the movie hits that market. This would mark the fourth straight PTA feature where some version of a 70mm presentation was offered, though it remains to be seen how wide Licorice Pizza's 70mm opening will be.

See what the hype is about when the Music Box opens LICORICE PIZZA on 70MM....