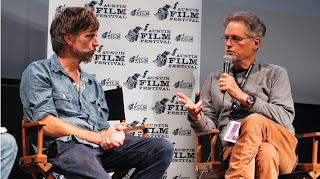 If you'll recall, PTA dropped by the Austin Film Festival last year to talk to Jonathan Demme about his career. That lovely talk can be heard here. While in Austin, Demme and PTA also co-hosted a screening of Robert Downey Sr's whacked-out 1972 Western Greaser's Palace (which, based on the footage shown, we will HAVE to dig up somehow), and discussed the film afterword. Now, thanks to On Story, that second talk has finally surfaced in video form.

The embed on the page seems to be a little sticky, but for now you can watch it HERE. The video is about 30 minutes long, but the talk itself is only about 14 minutes. Enjoy!