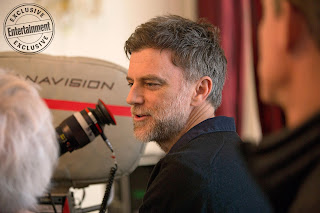 Entertainment Weekly today has run the first piece of press promotion from a representative of the Phantom Thread clan and it's the man himself! You can read the interview in its entirety here.

Nothing too spoilery in nature, but if you prefer not to know anything, we've posted some highlights below the fold: 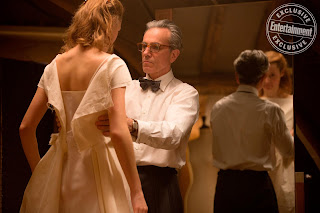 It’s funny, this day and age, it’s really hard to do anything. Phantom Thread was a terrific title, and it was an idea. It was the name of the production company, and it really did seem to fit and work. But we were kind of wondering if there was something else that would work as well. I wish I could say it was more strategic and mysterious, but it was just a case of wishy-washiness and waiting to see how things ended up. I swear.

On choosing not to go the festival route:


No, God no. No, it was not a choice. This was the first film in a while that we finished and not had leisurely editing period on. We finished shooting in April. We’ll be finishing the film right at the finish line to its release, so there was no opportunity to go somewhere we might normally go, like New York or Venice or Toronto, all that kind of stuff. The film, quite simply, is not done.

On the film's origin:


It’s very new. It’s a new idea, really within the past few years. Some of the previous films I’ve made have been ideas that have been lingering around for a while in one form or another. I generally didn’t have that much knowledge or interest in the fashion world until I started finding out a little bit about a guy named Cristóbal Balenciaga. He led very monastic life, completely consumed with his work — sometimes at the expense of other things in his life. Our characters become something very different. Our story focuses on if you have a character like that, what would it take to disrupt his life. Usually, it’s love that does that.

On the love story:


It’s not your standard love story. It’s more peculiar for sure. A lot of directors have tried and failed to make Rebecca. I’m probably next in line, but it’s a different story. I’m a large aficionado of those large Gothic romance movies as the old masters might do them. What I like about those kinds of love stories is that they’re very suspenseful. A good dollop of suspense with a love story is a nice combination.

On the appeal of the fashion world:


I just made a movie with all of these dirty hippies with facial hair and stuff. It’s like, “Oh, god. Let’s do something with fancy people.

On the nature of the Daniel Day-Lewis collaboration:

He was receptive to it, so that was a good start. Then the process of writing it was really the two of us together, quite honestly. I’d give him things as I was writing. Rather than go away and write a script and try to impress him, I was collaborating with him each step of the way as I was going, which was very helpful in terms of forming the story and the character.

On being his own cinematographer:


I should really clarify that. That would be disingenuous and just plain wrong to say that I was the director of photography on the film. The situation was that I work with a group of guys on the last few films and smaller side projects. Basically, in England, we were able to sort of work without an official director of photography. The people I would normally work with were unavailable, and it just became a situation where we collaborated — really in the best sense of the word — as a team. I know how to point the camera in a good direction, and I know a few things. But I’m not a director of photography.

[T]here is no credit on the film. If you can give credit, Michael Bauman is the gaffer that I’ve worked with for many, many years on a lot of projects. I could veto Mike, I guess, but he held a lot of the keys. There was a camera operator, Colin Anderson, I’ve worked with, and Erik Brown, who was the first assistant cameraman and Jeff Kunkel, who was a grip. It was a real package like that. It was a really easy way of working. You have to be very, very careful because there are way too many good cinematographers that I would not put myself in that class for a second.