It seems as though one of the two projects we keep hearing rumblings about is getting substantially closer to coming to life. A photo, we unfortunately cannot publish, was sent to us showing PTA shooting tests and operating a 65mm camera used by Kubrick on 2001: A Space Odyssey on the backlot of a place we also cannot mention. Fear not, I have re-created the photo here to whet your appetite: 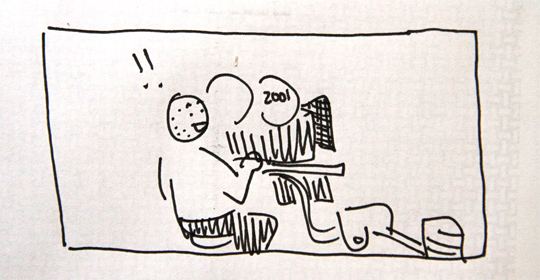 The e-mailer suggests that perhaps Paul was inspired by Nolan/Pfister's usage of the format on The Dark Knight & Inception. It's worth noting, though, that Nolan shot 65mm in a square, IMAX format whereas Kubrick kept the format at 2:35.1 to contain as much detail as possible for the optical effects. (thanks JZ) The last line of the e-mail also gloomily claims that whichever film Paul is shooting camera/format tests for will not be shot by Robert Elswit. More as it comes...