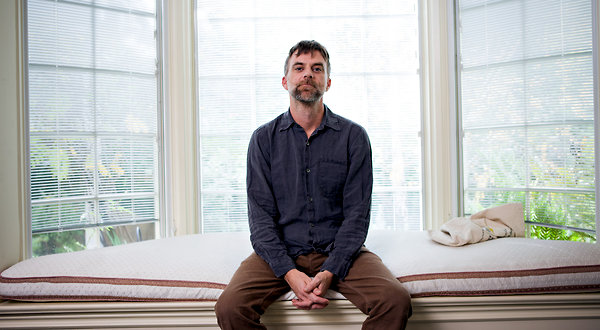 
Amiable and energetic, Mr. Anderson made his way to the guesthouse, where he proceeded to rummage through boxes stuffed with books and research material. To prepare for “The Master” — a story about the intense, symbiotic bond between Lancaster Dodd, a charismatic cult leader in post-World War II America (Philip Seymour Hoffman), and Freddie Quell, a tormented veteran (Joaquin Phoenix) — he tracked down as many books as he could find on the teachings of the Scientology founder, L. Ron Hubbard. They included “Dianetics in Limbo,” a personal account by Helen O’Brien, an early follower of the movement (and the inspiration for Laura Dern’s character in the film), and Hubbard’s own “Mission Into Time” (1973), about a sea voyage involving treasure hunts and past lives. (“He was really starting to lose his marbles by this point,” Mr. Anderson said.) He skimmed the writings of ex-Scientologists and pioneers of offshoot movements like Dianology and Dianotes, and perused several years’ worth of The Aberree, a Scientology newsletter.

Mr. Anderson said he still retains a fascination for the subject, which consumed him for years. “Laughing at it or being negative, that goes away so quickly when your head is inside it,” he said, “and you see how people are talking about getting better and taking control of their lives.”

While the Cause, Lancaster Dodd’s quasi-religion, is clearly a parallel version of Scientology, “The Master” is less interested in mocking it than in evoking the larger American tradition of spiritual questing and its endlessly regenerating cast of dreamers, visionaries, quacks and self-styled prophets. Mr. Anderson’s research was informed equally by scholarly tomes (Fawn Brodie’s “No Man Knows My History,” about Joseph Smith and the founding of Mormonism) and self-help pseudoscience (books like “Living Your Past Lives” and “Are Your Troubles Psychosomatic?”). “This stuff, it’ll make your head spin,” he said, pulling out books on psycho-cybernetics, the est movement and the theosophy of Madame Blavatsky.

While “The Master” may be too oddball to be an Oscar contender, it has performed well on critics’ year-end lists. And at least before the late arrivals of “Zero Dark Thirty” and “Django Unchained” it was the most closely dissected and passionately debated American movie of the year, confirming Mr. Anderson’s ability to incite stronger — and more divisive — opinions than almost any American filmmaker of his generation.

A common response, even among those who like “The Master,” has been bafflement. Many critics were eager to decode and interpret it, and some contend that only after several viewings does it reveal its meanings. Mr. Anderson said he has been pleasantly surprised by the reaction but also a bit stymied: “I knew we were doing something different, but I didn’t think it was from another planet.”

For him “The Master” is most obviously a story about the relationship between its two main characters. “That connection and that love, that was the cement,” he said. The widespread, and unfounded, expectation that it would be a Scientology exposé, he said, might have thrown some viewers. “If it’s not that, you kind of have to wrap your head around, well, what is it?”

To ask what precisely “The Master” is about misses the point that Mr. Anderson’s movies always contain multitudes. If his early films, like “Boogie Nights” (1997) and “Magnolia” (1999), were maximalist demonstrations of youthful prowess, committed to testing how much a film can hold and how extreme its emotional temperature can get, his mature works have increasingly felt like feats of concentration. “Punch-Drunk Love” (2002) and “There Will Be Blood” (2007) are both interior epics, colossal films that seem to take place inside someone’s skull.

“The Master” one-ups its predecessors by doubling the head space, creating a fluid mental landscape for the psychic duel between the Master and Freddie. As large as its themes may be, Mr. Anderson said he always thought of the film as a chamber drama. “In my head there was nothing epic or grand about it,” he said. “Everything about it was saying, ‘Make it smaller.’ ”

Everything about “The Master” seems distilled, from the eccentric, elliptical compression of the storytelling to the atypical combination of the large 65-millimeter film format and the tightly boxed-in compositions. Especially when seen projected in 70 millimeter, the fragmentary scenes and the unusually crisp, saturated image can produce, as Mr. Anderson put it, “that hyperrealistic thing that happens sometimes when you dream.”

“I hesitate to say ‘dreamlike’ — that feels like a code word” for nonsense, he added with a laugh, using a cruder term. “But all the stuff Master’s selling about closing your eyes and being able to relive things: it got inside me, certainly. And using lenses that are 40, 50 years old. The voodooist and hippie in me feels like those things get into the film.”

Eccentricities, ambiguities and all, “The Master” gives the impression, as does all of his work, of being exactly the film its director wanted to make. At 42, the still boyish Mr. Anderson retains some of his enfant terrible air as perhaps the most uncompromising of major American filmmakers.

Mr. Phoenix, in an interview at the Venice Film Festival this fall, said that Mr. Anderson’s casual manner can be deceiving. “Paul is in complete control of what’s happening, and yet he never gives you the impression that he knows where it’s going,” he said. “What that does is encourage you to work really hard to expand the ideas that you’ve been talking about.”

Speaking by phone recently Mr. Hoffman, who has appeared in five of Mr. Anderson’s six features, said he has never worked with a filmmaker so willing to reinvent himself. “Every time I work with him, I’m always surprised,” Mr. Hoffman said. “He’s allowed himself to go further and not to always think he has the answer. Shooting with him now, you get the feeling that if we don’t find our way today, we’ll find another way to do it.”

Mr. Anderson’s first two features, “Hard Eight” (1996) and “Boogie Nights,” were both holdovers from teenage ideas (the latter given a dry run as “The Dirk Diggler Story,” made when he was 17). With “Magnolia,” the first film of his adulthood and a raw-nerved response to the death of his father, the television personality Ernie Anderson, he threw himself wholeheartedly into the risky enterprise of a nakedly personal film.
“There’s so little filtering on that movie,” he said. “I don’t really look back on it that much, but it’s probably very precious to me.”

With “Punch-Drunk Love” he kept the emotional intensity of “Magnolia” but replaced its freewheeling sprawl with a formal concision derived from movies he was obsessed with at the time: Jacques Tati comedies, Fred Astaire and Ginger Rogers musicals.

As a brash upstart Mr. Anderson was never shy about borrowing from the greats: Kubrick, Altman, Cassavetes, Scorsese. “It’s like learning the chords to a song,” he said. “Maybe you have a story to tell, and an entrance into it is through another filmmaker.”

He’s still influenced by movies, although less directly — the large screen in the living room that day was tuned, as it apparently always is, to Turner Classic Movies (which was showing a Barbara Stanwyck marathon). Freddie in “The Master” was an attempt to take the familiar figure of the tormented veteran, a staple of ’40s and ’50s film noir, “and actually give him a real inner life,” Mr. Anderson said.

But his cinephile inclinations have been matched of late by a deep-dive approach to American history, a detailed immersion in the past that seeks to uncover the mysterious workings of the American mind. Taken together “There Will Be Blood” and “The Master” speak volumes about this country’s tangled relationship with work, status, money and belief. Mr. Anderson said he isn’t exactly sure how to explain his emerging role as a historian of the national psyche. “There’s just something about those eras,” he said. “I mean, talk about past lives. It’s as if you had some unfinished business there.”

His next project, which will take him into another chapter of the century, the late ’60s and early ’70s, is an adaptation of “Inherent Vice,” the 2009 novel by Thomas Pynchon. The book is a stoner private-eye saga, and Mr. Anderson has found an invaluable “research bible,” he said, in the underground comic strip the Fabulous Furry Freak Brothers.

As always, the idea is to “burrow around” (a phrase he used more than once to describe his process) to find his way into someone’s head. Mr. Anderson said, again without mentioning Mr. Pynchon by name: “It feels really good to be doing that, being a participant in his mind.”
Posted by modage at 12/28/2012 07:23:00 AM