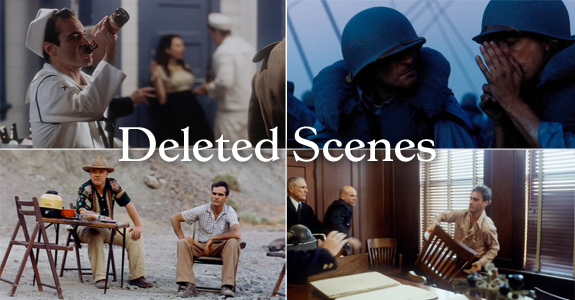 As you already know "The Master" will be released on Blu-ray and DVD this Tuesday and we've been rolling out some great behind-the-scenes photos from the disc on our Twitter and Facebook pages. I've been digging into the disc since it arrived last week and it's another stunner. In addition to the film, the Blu features an 8 minute behind-the-scenes short called "Unguided Message," Trailers, Teasers, "Let There Be Light," a Digital Copy and 20 minutes of deleted scenes stitched together entitled "Back Beyond" which are fucking fantastic. Naturally with so many new deleted scenes (and puzzle pieces now in place) we thought it was time to update our Guide To 'The Master' Deleted Scenes. If you'd like to stay fresh for the disc, hold off until next week but if you want a peek at some of the new stuff coming your way, click over and explore. We also have a few copies of the film to give away so lookout for details on how to get one next week.

In other news, both Nicolas Cage and filmmaker Jane Campion had some nice words to say about "The Master" and PTA. The Playlist spoke to Cage about films that excite him and he said, "I love “The Master,” I love “Drive,” I think Ryan Gosling and Joaquin Phoenix are the most exciting actors out there -- I think [U.S. film is] in good shape.The problem is, because of the economy, and I know this better than anybody, nobody has any money. And it’s hard to get these little movies made. But the fact is they got made, it happened, “The Master” exists, “Drive” exists, David Gordon Green’s “Joe” exists -- it can be done." Indiewire talked to Campion who said, "I saw 'The Master,' 'Seven Psychopaths,' 'Killing Me Softly' recently and loved them... I think what people really love are stories and stories that are stretching us in some way. That are really thrilling to our lives still. It's not just business. The business comes after. But you know, when you've got people as extraordinary as say, Paul Thomas Anderson... They're so creative, they're so exciting. For me, that's what it's all about."

Hopefully you've been following along with our "Making The Master" interview series (with writer/director Paul Thomas Anderson, producer JoAnne Sellar, costume designer Mark Bridges, production designers Jack Fisk & David Crank, actress Madisen Beaty and editor Leslie Jones). We have the 7th installment coming up on Monday with poster designer Dustin Stanton. Dustin has been working with Paul for nearly 14 years now designing nearly every PTA-related poster/DVD/soundtrack/newspaper ad going all the way back to "Magnolia." We talked to him about creating the teaser poster, DVD packaging and his creative process working with PTA. Stay tuned!