Hey there - few things to take care of, so let's get right to it.

-Above is a pretty groovy illustration from the most recent issue of The New Yorker for a piece about the New York Film Festival, which begins this Friday, September 26. Some critical thinking has led us to conclude that the two blue figures are from Gone Girl while the two green figures are from Inherent Vice.

- The one star of the film that has spoken rather freely about his impressions from the set is Josh Brolin, who plays Bigfoot Bjornsen, of course. He had some interesting things to say in a piece about the film found in The Los Angeles Daily News recently. The bullet points:


"I read the book as fast as I could before I saw Paul, which means I might as well have not read it," Brolin, 46, admits, "I was so confused by the time he came, I was like stuttering through the whole thing. It was like trying to have a meeting after you've taken a bong hit or something.

Brolin describes the story's vibe as something in "Manson territory."

"It's during the time of of the shattering of the ‘Right Stuff’ mentality into whatever revolution that conjures in you, whether that’s the assassinations or the sexual revolution or drugs, all that. It’s that transition," he says.

"This guy Bigfoot is one of the favorite characters I’ve ever played... He’s a guy that, five years earlier, would have looked like one of the ‘Right Stuff’ guys. But because of his refusal to adjust to any future that doesn’t look like he wanted it to look, he’s kind of pathetic.”

"It’s a really circus experience,” Brolin says of the production. “It feels like traveling from city to city and putting together skits. You never really know if it’s going to work when you finally do it. And then if you’re doing something like Pynchon, which just naturally has that structure anyway, it’s sort of double wacky.”

- Last, but certainly not least, The Film Stage has obtained our first look at Reese Witherspoon as Penny Kimball in Inherent Vice. Click below the fold and see at your own discretion. 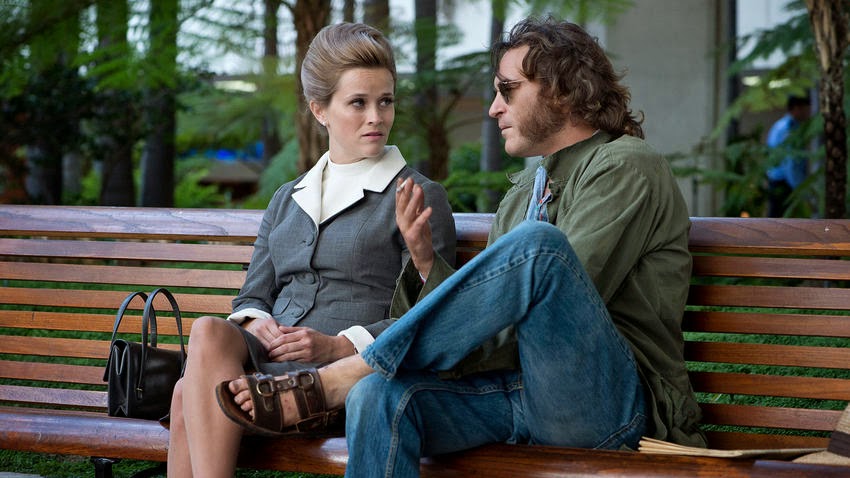 (Thanks to our readers for bringing some of these to our attention!)

Find more information about the film on our Inherent Vice page.
Stay tuned to Twitter and Facebook for the latest news and updates
Posted by Bryan at 9/24/2014 05:53:00 PM