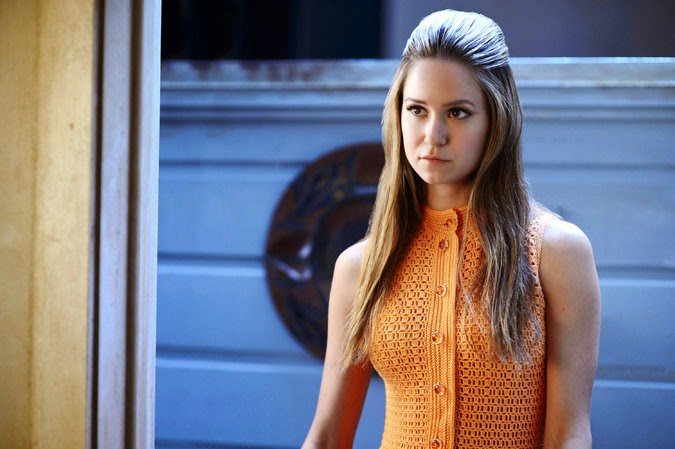 In an article about forthcoming break out performances, The New York Times has the first official pic of Katherine Waterston as Shasta Fay Hepworth in Inherent Vice, seen above, and some very interesting remarks from Waterston on the nature of the project and the process of working on it. The article reveals that PTA came to an interest in working with Waterston after watching her 2008 film The Babysitters. The remarks do not reveal explicit plot points per se but they may be more suggestive of the film's tone than you'd like to know going in, so read forward at your own discretion:

In Mr. Anderson’s narcotic noir, “Inherent Vice,” set in Los Angeles in 1970 and based on the Thomas Pynchon novel, Ms. Waterston plays Shasta, right, the free-spirited, sensual ex-girlfriend who wakes the mutton-chopped private investigator Doc Sportello (Mr. Phoenix) from his stoner haze. Like a beacon shining through the counterculture’s druggie fog, Shasta bristles with the kind of wild-eyed, visceral energy Doc has self-medicated into oblivion: a romantic embodiment of what might have been, and what might be lost.

“Certainly, this whole film is sort of the smoke clearing after the ‘60s and everyone coming to, wondering what the hell happened,” she said. “There’s a lot of uncertainty on every page of the novel. Is it all in her head? Or not? Is she as afraid as she needs to be? Or not?"

Over at Filler Magazine, Pretty Little Liars veteran Sasha Pieterse dished out some nice comments about her experience working with PTA & co. on Inherent Vice:


"I'm pretty sure I will never have a better character name," laughs Pieterse, who goes on to gush about landing the part of Japonica and working with Anderson, as well as the film's star-studded ensemble cast, including Joaquin Phoenix, Reese Witherspoon and Josh Brolin. "It was literally a dream to be involved with the movie," she says. "I'm really happy with the part of the film I'm in; I have so many fun scenes...and so many dark scenes."

Elsewhere in the piece, Pieterse goes a bit more in depth about her experience working on the film. These remarks are a slightly spoiler-laden in nature. Read at your own discretion.

FILLER: We’re especially excited to see you in Paul Thomas Anderson’s Inherent Vice. Are you looking forward to premiering the film in September at the New York Film Festival?

SASHA PIETERSE: I am so excited to be in New York for that. I’m just honoured to be around all those amazing people — it’s going to be a really great ride. I’ve never been to the festival before; it’s going to be an amazing experience.  It’s blowing me away. I still have one of those feelings where I’m like, “pinch me, this isn’t real.”

FILLER: Have you seen the film yet?

SP: I have not, so it’s going to be a big surprise for me too. I hope I get to see it before hand. I might…Paul is not secretive, but he doesn’t want to show anybody till it’s perfect, which I totally understand. I’m just really excited to see it. I know what to expect, but I don’t at the same time. It’s going be crazy to see it all come together; it was just such an amazing shoot and [Paul] has such an amazing process…I’m just over the moon about it.

FILLER: You must be so excited; it’s so soon! What did you think when you first read the script? It’s based on a pretty intense and unique book, and I imagine the script doesn’t stray far.

SP: No, being a Paul Thomas Anderson film, he puts in as much as he wants. The difference between the book and the script is more so a little bit of flavour, it does though still ring true to the story. And actually, what I respected most about Joaquin is that he would have the book and the script side-by-side, so basically he would say, “what do you want out of either?” People who are big fans of the book will appreciate that. Joaquin was just so amazing and so in it.

FILLER: How was it acting opposite him?

SP: He blew me away. I was not sure what to expect, and I was intimidated for sure at first, but he’s wonderful. And he’s cuckoo for sure (laughing), but in the best way possible. He’s such a talented person and such a nice person.

SP: To work side-by-side with him was incredible. He has fun, but he’s so in character that it’s easy to be in scenes with him because it just flows; there’s nothing to stop you from really diving into that scene. It was fabulous working with him, and fabulous working with Martin Short, who is hysterical. We had so much fun filming — when you watch it, it will show in the scenes.

FILLER: We’ve talked about Joaquin Phoenix and Martin Short, but there are so many more actors in the film; it features a huge ensemble cast, Anderson’s biggest since Magnolia  I understand. What was it like working alongside so many veteran actors?

SP: It was different than I expected…I don’t know what I expected, but what I got was that people love their jobs. There was just a vibe about this set that was great because they all wanted the same thing. They are veterans, but they’re down to earth, and there really wasn’t much drama or anything like that. I mean Maya Rudolph was nine months pregnant while we were filming, and she had the baby while we were filming (laughing)!

SP: Yeah, she had a trailer right outside the stage door, and she had the baby in quarantine. She would literally film a shot and run out to breastfeed (laughing). It was crazy, but so cute!

FILLER: Was there one actor you were especially excited to share the screen with?

SP: I wanted to work with all of them, it’s such a crazy cast, but I think Joaquin. He’s brilliant; he truly is brilliant. I was just awe-struck by him.

FILLER: Paul Thomas Anderson is such an incredible director, what was it like working with him? How does he help prepare you for a scene?

SP: He is so funny and so sweet, and he has such an amazing vision. He’s incredibly hands-on, but in the best way possible. He’s there at rehearsals, barefoot and like, “hey guys, what’s up?” He’s very very chill. And what I really respect about him is — though I don’t think the studios always like him for this — he will literally take as much time as possible to get a scene where he wants it to be. If he takes 4 hours or 8 hours on a scene, he doesn’t care; that’s just how he rolls. It’s so amazing to work with someone like that. On the first day, he’s like, “this is kind of what I want out of the shot, so do it that way, and then do whatever you want to after that.”

FILLER: He gives you a chance to explore your character.

SP: To have that freedom and flexibility to really dive into your character and shape the scene, and really have free reign in that, it’s an actor’s dream.

FILLER: Can you tell us a bit about your character Japonica Fenway? I understand she’s something of a free spirit.

SP: She is a very unique person. She’s a drug addict and her part of the story, based on what is going on, is kind of one of the missing pieces. Joaquin Phoenix’s character travels to so many different places and there are so many different layers [to his story], and I’m just glad I’m one of them.

Then, finally, Rolling Stone has acquired a new official image of Joaquin and Ms. Waterston as part of their Fall movie preview.

Inherent Vice premieres at the New York Film Festival exactly one month from today! If you are feeling bold, and if tickets have not already gone like hot cakes, you can chance picking up a couple seats for the screening via the fest's page for the film here.

Find more information about the film on our Inherent Vice page.
Stay tuned to Twitter and Facebook for the latest news and updates
Posted by Bryan at 9/04/2014 10:14:00 AM