From Script To Screen: A Guide To The Deleted/Missing Scenes In ‘The Master' 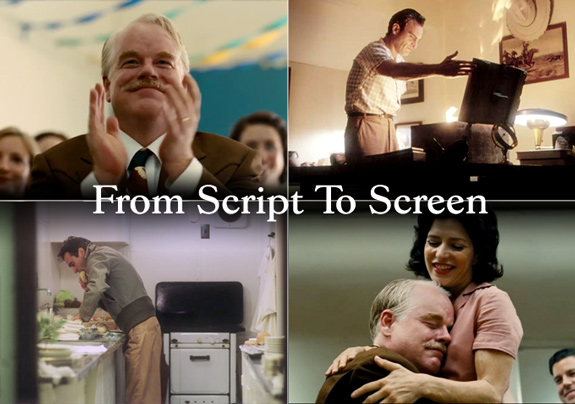 I've been meaning to dig into this for quite some time and thanks to our friends at The Playlist, found a larger venue for this project which we're excited to finally unveil for you guys. From Script To Screen: Your Guide To All The Deleted/Missing Scenes In ‘The Master' is exactly what it sounds like, an overview of many differences between the screenplay and final film. In an effort to keep it at a manageable length, this is really just a primer for the many differences between the two versions and a perfect companion piece to Our Guide To The Deleted Scenes From 'The Master' Teasers & Trailers. The Weinstein Company recently posted the WGA nominated screenplay on their website so this seemed like as good a time as any to dive in. I had refrained from reading the screenplay until after seeing the film but when I finally did, found it fascinating to see how "The Master" evolved from the version on the page.

Joaquin Phoenix described PTA's process back in September, "Paul will write many, many scenes that won’t make it into the movie," saying that PTA doesn't worry about continuity, is open to improvisation and often scenes that might take up one-eighth of a page can shoot for a day and a half. Though we already noted how much of the footage from the teasers & trailers didn’t make it into the final film -- an intentional move by PTA and editor Leslie Jones to give of the flavor of the film without actually spoiling it -- the screenplay also takes significant detours from the final film with entire deleted sequences, subplots and dialogue that radically alter the DNA of the piece. While some moments in the screenplay now seem extraneous, by excising certain scenes PTA has changed the nature of various relationships between the characters and obscured certain aspects of the story that were made clearer in the text as you’ll see below. It should go without saying but this contains major spoilers and should only be read after you've seen the film.

Have you read the screenplay? Which deleted scene would you most like to have seen included in the film? Sound off in the comments.