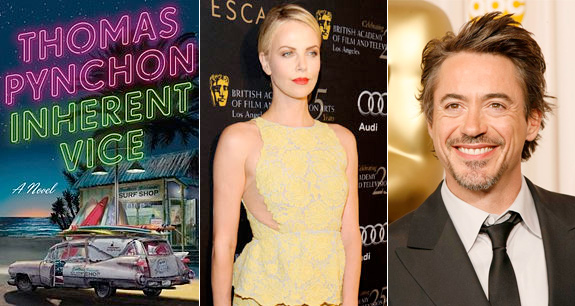 Wow, well this certainly comes as a surprise. According to Showbiz 411 (via The Playlist) things are already gearing up for PTA's adaptation of "Inherent Vice." The article states the obvious (that 'Vice' will be PTA's next film & Annapurna are once again financing), the unconfirmed (that Robert Downey Jr. who had originally been pegged to star is still attached) and drops one new casting rumor: that Charlize Theron may be joining the film as well. See below:

There were a lot of internet rumors and some clues over the last week. Now I can confirm that Paul Thomas Anderson’s next film will be an adaptation of Thomas Pynchon’s novel “Inherent Vice.” And also, it does like Robert Downey, Jr. and perhaps Charlize Theron will be the stars, with more names coming. After disappointing box office on “The Master,” PTA is said to be interested in having a moneymaker.

I can tell you that the brilliant and relatively young Megan Ellison is going to produce via her Annapurna Productions. Ellison is also busy prepping David O. Russell’s next one, “American Bullshit,” with Bradley Cooper and Christian Bale and, obviously, a new title.

Pynchon is notoriously reclusive. The legendary author of “Gravity’s Rainbow” and “V” has lived for years right here in New York, married to literary agent Melanie Jackson. He’s our J.D. Salinger, meaning no one ever sees him. (Other writers like this include Thomas Harris, the creator of Hannibal Lecter, who lives in Sag Harbor, and Harper Lee, who used to be in New York and is now down south in what I’m told may be assisted living.)

Pynchon did narrate a video for “Inherent Vice” which can be –and has been–found on You Tube. I’m told he thinks very highly of Anderson, who’s met with him a lot. “Pynchon only wants Paul to make this movie,” says a source. And we do too. More: “It’s closer to Boogie Nights than any of his other films.”

Though the article is a bit sketchy as far as unconfirmed sources go, back in December PTA did name Charlize as one of the actors/actresses he'd most like to work with it wouldn't surprise us if it ends up being true. "Charlize Theron I think is dynamite.  She's so great," he told Sirius naming her alongside Jim Carrey, Robert DeNiro, Jennifer Jason Leigh and Michael Shannon. So maybe don't be surprised if any of their names pop up for roles either... We must say that it's pretty thrilling that "The Master" hasn't even opened in certain territories yet (or landed on Blu-ray) and we're already talking about the next project. Any readers who have read the novel want to guess on who Charlize might be playing? Sound off in the comments but no spoilers please.