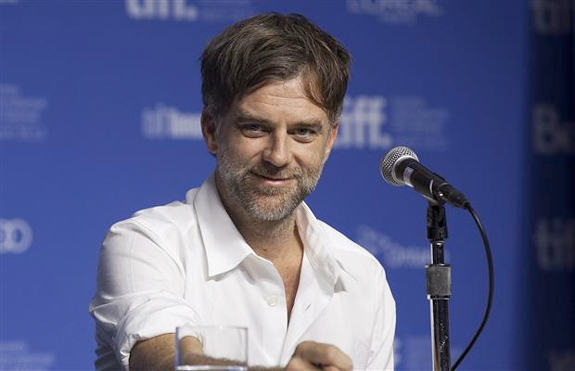 Paul Thomas Anderson just hit the wall. His eyelids are starting to droop over his steely blue eyes, and the five-o’clock shadow looks like a dark muzzle, slowly suffocating the man who just walked away from the Venice film festival with the majority of the hardware for his latest film, The Master.

“At this point, nothing but a nap will do,” says Anderson, who’s been holed up in a Park Hyatt hotel room for the past two hours. One of the swarming handlers looks up momentarily from her BlackBerry to offer the American auteur a cup of coffee, which he waves off with an air of fatigued frustration.

“No point in throwing good caffeine after bad.”

At this point Anderson acknowledges the next inquisitor with an apology. “I’m so sorry. I’m a little bit spacey.”

Within seconds, a few of the questions scrawled across my legal pad have already been answered, namely, why cast Joaquin Phoenix in the role of Freddie Quell — the fragmenting personality at the very heart of the bizarre post-Second World War period piece?

Just looking at Anderson at this moment of rawness reveals an abstract, but undeniable, connection between the man who explored the depths of America’s oil-based economy in There Will Be Blood and the wacky actor who blurred the boundaries between fact and fiction in the self-indulgent ode to addiction and celebrity in his last festival outing, I’m Still Here.

It’s the borderline manic expression bleeding through their eyeballs; Phoenix could be the funhouse reflection of Anderson, the uncontrollable demon lurking inside an otherwise contained family man.
Anderson can’t articulate it any better. In fact, he’s having a hard time articulating anything at all. “I always wanted to work with Joaquin, blah, blah, blah…” he says, looking so bored it’s heartbreaking.
So, then, what’s the point of this thoroughly sketchy character who returns home from the war in the Pacific with a terrifying alcohol addiction and a weak sense of a moral compass?

Is Freddie Quell the embodiment of the universal soldier abandoned and forgotten after his years of service by the society he put himself in harm’s way to protect? Is he Fred E.qual – the Everyman so desperate for a sense of purpose that he becomes involved in a new religious movement called The Cause, led by a charismatic — and equally alcoholic — leader played by Philip Seymour Hoffman. And if so, why is he so menacing?

“He’s not menacing,” says Anderson, smiling. “He’s just kind of unpredictable. He’s sweet, Freddie. He’s really sweet. He just picks at Master’s fur, and I like that. He kind of picks at Master’s coat jacket.”

Indeed, over the course of the whole, grand, 70mm spectacle, the viewer watches an almost romantic dance between Freddie and Hoffman’s “Master” – an L. Ron Hubbard-styled character named Lancaster Dodd.

The constant drifter finds an anchor in the portly form of Dodd, but the relationship never really finds any form of satisfactory consummation or catharsis. And that lack of genuine connection is probably the whole point of Anderson’s epic.

Again, not that he can articulate it: “You really only discover what you’ve made after the fact,” he says. “You know, the gravity of the story is pretty mysterious when you’re working on it. It’s like trying to explain why I fell in love with my wife. I can say she’s pretty, she has a great sense of humour and brown eyes – but why do I love her?... It’s not a question I can really answer.”

Yet, as Anderson starts to let himself ramble just a little, he talks about his own family and growing up with a father who came back from the Second World War somewhat altered.

“I guess there’s a romantic thing there,” says Anderson. “Maybe I wanted to figure out what happened in his life and what life was life for him. It’s a never-endingly interesting homework assignment,” says the kid who grew up in the heart of Los Angeles.

Ernie Anderson was a celebrity in his own right after returning Stateside, landing a job as the “Voice of ABC” and later, collaborating with comedian Tim Conway on the regular movie broadcast called Ernie’s Place.

“I think I’ve tried to make sense of my father,” says Anderson. “He would always go off by himself. I mean, he was around all the time, but he was kind of quiet in a weird way. For a big personality he was actually a quiet guy. And he never talked about the war.

“Maybe this movie is my way of trying to make sense of what it must have been like for him: To go through bad shit, you know, and have to move on.”

Anderson says the parallels to what’s happening today are obvious. “Just open the newspaper and you see someone coming back from Afghanistan a complete wreck. And I wonder if there’s ever going to be a moment when I don’t have to read these stories anymore. You know?”

He brings up the band Pussy Riot, sitting in a Russian jail for criticizing the Kremlin, and he arches his eyebrows as a look of anger passes over his heavy eyes.

“Is this a fucking joke? I thought fascism was going out of style and here’s this story that’s comical — not that it’s funny. It’s not funny at all. But you want to say: ‘Are you fucking kidding me?’ ”

It’s at this point that the title of the film bubbles to the forefront of conversation. “You know, you’re the first journalist to ask me about the title. Really, it was just a process of elimination. In fact, the Internet actually gave it its title first. A version of my script got out online years ago and they referred to it as The Master, even though it didn’t have a title on it or anything. So we just ended up calling it The Master. We never did find another title for the film.”

Anderson seems reluctant to get into the moral judgments surrounding the connotations of the word, and whether it’s a question of craft, and being very good at something, or merely the opposite of slavery. He doesn’t even clarify which character is “the master” — although, at the most basic level, it would seem to be Hoffman, the self-possessed, sexually addicted guru who pulls a flock of needy followers into his massive aura.

Is it for this reason the Church of Scientology has its headquarters in Los Angeles, the cradle of American pop culture and secularism? Are people so desperate for guidance they’ll attach themselves to a brain wave machine?

Anderson doesn’t want to touch the subject of Scientology in any direct way. But he says Tom Cruise did see the film.

“I haven’t done the machine. And it’s funny to be in this position to sort of speak for Scientology, because I can’t. I’ll only get it wrong and end up insulting what people hold very close to them and I don’t want to do that,” he says.

“But in terms of how it relates to this story, and the initial ideas, Dianetics explores the idea of past lives. And that’s interesting to me: What if the problems we have are residual problems from a life we lived before? I buy that. It’s optimistic,” he says.

“It says there’s something else after this world.”

Do we need to know that? Is that where our craving for gods comes from?

“I have no idea,” he says, as the conversation turns toward Nietzsche, and the notion of personal responsibility.

“Sure, you can go out there and slay the dragon and get to the bottom of all that, but then your wife will tell you to take out the garbage. You know, so you’ve released yourself from your bounds but meanwhile, the kids need a diaper change: The harsh realities of going through daily existence are there every second.”

Anderson says he doesn’t mind the everydayness of it all. “I’m the kind of person who needs routine. If I don’t have it, I get grumpy and fussy. But things are going really well for me right now.”

Indeed, Anderson’s film probably would have won the Golden Lion at Venice for best picture if the rules had allowed. But the jury awarded Phoenix and Hoffman a dual win for best acting. Anderson won the best directing prize, and Venice rules state one film can’t win everything.

“I don’t really enjoy the fruits of my labour,” he says in response to the question of external validation. “I’m much more interested in the labour… but I really can’t complain. I love my job. I have a great family. And that’s what I keep in front of me,” he says.

“I don’t really have a predilection for dismantling things, or self-destruction. But sitting in a hotel room talking about yourself all day is a pretty disorienting experience. I’m really on my last legs.”
And with that, the woman with the BlackBerry reappears, eager to serve.