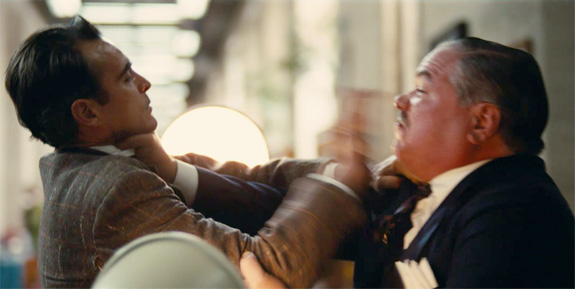 Ever since the news first broke that "The Master" would be shooting in 65mm, questions have lingered about exactly how much of the film would be shot in the large-format. We knew before the film's release that the number was definitely over 50% but Kodak sat down with cinematographer Mihai Malaimare who confirmed that the number is closer to 85%.


Anderson and Malaimare initially planned to shoot mainly portraits with 65 mm, about 20% of the movie. Even in situations where audiences are not seeing a 70mm print, the 65mm-originated scenes deliver breathtaking images that draw viewers into the story.

“As we were looking at dailies, we saw that every 65mm shot was so amazing,” says Malaimare. “After a week or two of shooting, we switched, and ended up shooting something like 85% of the movie on 5-perf 65mm.”

The 35mm cameras – Panavision Millennium XL2s – were brought out for handheld scenes, or other shots that required a dirtier look. “When your eyes are accustomed to what 65mm looks like in terms of grain and depth of field, with these amazing landscapes, switching over to a smaller negative area, you perceive the difference immediately,” says Malaimare.


He also discussed the quality of 65mm saying that it would give you roughly 8k resolution -- Our Guide pegged it between 8k-10k -- which is twice the resolution of even the best digital 4k projectors.


“Paul really believes in the photochemical process,” says Malaimare. “It delivers better quality. If you scan a 65mm negative, it will give you at least 8K resolution for the DI, but that is definitely expensive. Maybe it’s a matter of respect for the format. It’s about the approach you take. If you know from the beginning that you don’t want to scan, you’re more careful with the lighting and everything. With a DI, you tend to be sloppier because you know you can fix and hide things later. By using the large, low speed negative, not using any filters in from of the lens, and using these very sharp lenses, you get extremely high image quality – and you don’t want to ruin that with a scanner.”

If you want to get really in-depth, "The Master" cinematographer also discusses lenses, aspect ratios, cameras, and film stocks in the full interview over at Kodak. (thanks Fernando!) And if you're unclear as to the difference between 65mm and 70mm, now would be a great opportunity for you to check out our Guide To 70mm.

Enter our Gone To China Contest to win a copy of the soundtrack!