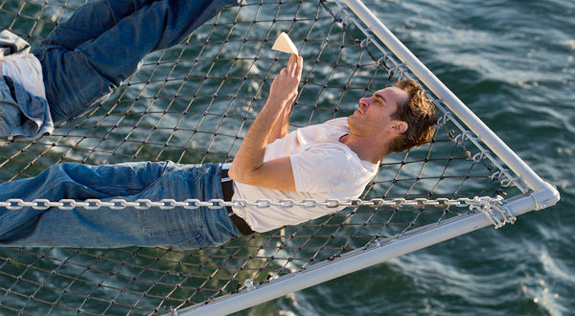 Early on, Mr. Phoenix said: “I told Paul I wasn’t going to self-modulate in any way. I wanted to just expose the id.”

Today the NYTimes posted a great (but brief) interview with Joaquin Phoenix who talks about his brilliantly unhinged performance in "The Master."  Read the entire thing here. The Village Voice also sat down with Paul a few weeks back for a lengthy interview which was also published today. There are some minor spoilers (the ending is discussed in the next-to-last-paragraph on the last page) but it's a fantastic read and easily the best of the recent interviews. We've archived it here too in case you want to save it for later.

In other news, we received word directly from The Weinstein Company that "The Master"s 9/14 engagements in New York and LA will be exclusively in 70mm. In NYC, those theatres are The Angelika, Village East Cinema and AMC Lincoln Square and in LA the Arclight (with more theatres possibly to join.) Tickets are now onsale for opening day at Village East Cinema in NYC and opening weekend at the Arclight with tix going onsale for the other two within the next week or so.