Details Arrive For The New ‘The Master' Trailer Already In Theatres 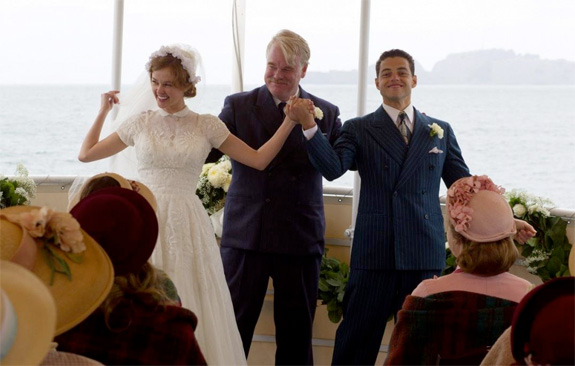 Over the weekend we learned that a new trailer for "The Master" had already quietly made its way into theatres. We asked our readers to get back to us with any details for the new trailer and reader Nate Eggert responded with a detailed synopsis.

I can assume you have caught the new trailer by now, but in case not and you're still looking for more details, I saw it today, also in front of Bourne Legacy at the Landmark. (An odd placement of it no? Perhaps some friendly teasing to Mr. Elswit and Mr. Renner?)

Some things besides the window banging (a terrific pull-back, I believe it was raining, camera outside, Freddie trapped inside), Car make-out (didn't catch who the girl was), New arrest shot (Dodd screams back something like, "Don't hurt him!"), and AA Rifle shooting, which seamed to be target practice in the same desert/time as Freddie following Dodd in that worth the 10 dollars of admission shirt and hat (also in the trailer)....

- The push-in of Freddie in his Sailor blues, pinning up the note that he's leaving, I believe described as being in the footage shown at Cannes.

- A small bit of Dodd actually speaking to the crowd (which holy shit looks like could be PSH best performance in the film). It seemed to me that he was even adding on an even EXTRA accent and grandioseness than in his other plain talking scenes, maybe like a "performance voice". Whatever it was, it felt good.

- A tastily awkward close-up of Dodd's daughter licking her lips.

- This one I'm not sure about, but at one point I think Dodd may call Freddie out to that tented stage; I think... Dodd motions his hand, cut to Freddie starting to walk, cut to push-in shot on the other side (left side) of the stage that the other trailers showed Dodd entering from on the right, with that great tracking shot on Dodd's back. (Again, could be totally making this up in my head, or the trailer was just cut this way and Dodd actually calls out his family or something. Guessing and overanalyzing is fun, but how wonderful that we don't know the whole story just by watching the trailer.)

- A bunch of cut-shorter repeats

Overall I found this piece to be a little more of a "just shots", instead of a self contained micro-short film as the first three felt to me, but it was obviously just as exciting and my biggest complaint is that it was too short, and that Borne Legacy played after it.

Thank you for all your hard work, translating into me wasting an hour from each day.

According to @ComTrackStars, the new trailer is an unusually brisk 1:09 and "most theaters will probably have it this week." We'd imagine it'll make its way online before too long. Stay tuned.

In other news, "City Of God" director Fernando Meirelles (whose new film "360" is out now) had these kind words to say for PTA recently in an interview with The Scotsman. (via @darthmonk3y)


And finally, who are some of your favourite directors?
I love Paul Thomas Anderson, everything he does. And I watched Gaspar Noe’s Enter The Void recently and was shocked, blown away. Everyone should see it immediately. Do it over two consecutive nights because it’s three hours long and you will get tired. This film deserves attention.