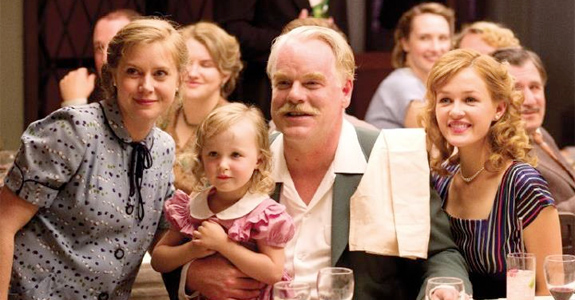 With just over a month to go, the marketing for "The Master" appears to be in full swing. We've now received two separate reports that there is a brand new trailer for "The Master" currently playing in theatres. The first report comes via @BrianDuffield who wrote us the following about the clip.


Hey, there was definitely a new trailer in front of BOURNE LEGACY. Joaquin banging a window while Hoffman spoke. Amazing. [It's] absolutely not [the previously released trailer]. It had Joaquin banging a window rhythmically through out. Adams shoots a rifle at one point. It had Hoffman being led away by police (different shot than others), yelling back at the house. Joaquin kissing in a car.

The trailer was playing at the AMC in Century City before the 7:30pm showing of "The Bourne Legacy" on Friday night so we put out the call on Twitter to readers to see if anyone else had seen it and received a confirmation from another reader @Hendyhandel  who confirmed "The new trailer's playing before "Bourne Legacy" at The Landmark in West LA. Window banging. AA fires a gun. It's legit." We assume this will makes its way online at some point but until then, if any other readers get a look at the trailer, please drop us a line with any further description.

"The Master" Soundtrack will be released by Nonesuch Records on September 11th. There was an Amazon listing confirming this but it appears to be defunct now... so we're still waiting on a tracklisting and further details. (Thanks to site reader @naivemelodia for all the detective work on this!)

In other news, you will be very happy to know that Mr. FortyFPS and I have been doing a major overhaul behind-the-scenes and should have some very exciting archival stuff rolling out on the new site very soon. Stay tuned.

We're still waiting to see which theatres will join the Alamo Ritz in presenting the film in 70mm. It appears that AMC Theatres will not be joining them at any of their locations nationwide neither will the film's UK distributor.