We have a quick update this morning while we finish up a much bigger post for you guys. Reader of the site Justin reached out to Kodak asking what film stock was used for "The Master" and got a very helpful reply. Kodak, who are the only company still producing 65mm film stock, revealed that “More than half of ‘The Master’ was shot on 65mm 5207, 5201 and 5213 (the rest was 35mm).” See the exchange below: 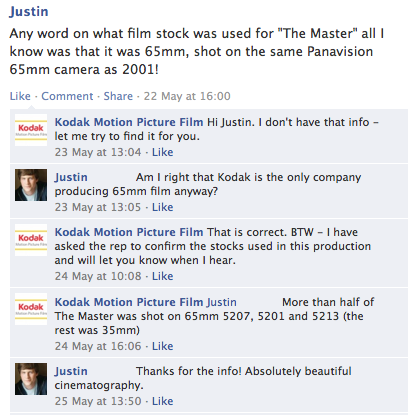 We also spoke to In70mm editor Thomas Hauerslev who confirmed through the film’s post-production manager that it will be shown in 1.85:1, not PTA's usual anamorphic 2:35:1 aspect ratio. Much more from our interview with Hauerslev coming very soon...

In other news, The Playlist sat down with director William Friedkin ("The Exorcist") who had some kind words for PTA when discussing which films he's currently excited about.


When you watch current films...
I don't.

There's nothing out there that interests you?
Very few things. I'll definitely want to see Paul Thomas Anderson's film called "The Master," and whatever the Coen Brothers do I'd probably be interested in. Not too many others.

Stay tuned. We should have a very helpful/informative post in the near future. FYI, we're a lot more active on Twitter than Facebook so if you like your news up-to-the-moment, that's where you want to be.