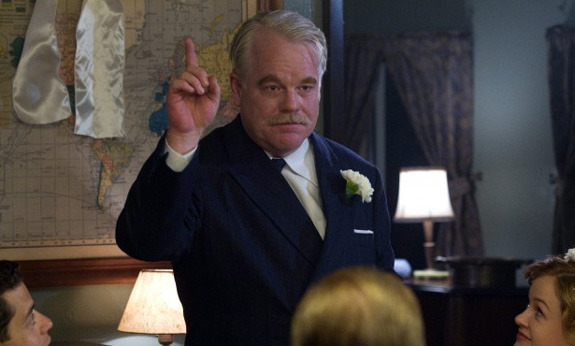 Note: This interview was translated from Italian to English with the help of reader Stefano Cattaneo.

There's a scene where a man blame the head of the cult of being a dangerous liar
"That's the scene that most people who saw the movie remembered" the director said in his office, where he follows the preparation of the print we'll see in Venice, "and most people seem to identify that skeptical character with myself, but that's not the case"

Who do you identify with?
"Whit no-one really, even though every character carries some personal element. I don't think there are movies, written and directed by the same person, that lack this characteristic"

Is it true that your father had similar experiences?
"My father was in the Navy during World War 2, and experienced the trauma of those who have fought the war. But the similarities stop there."

Why shooting in 70mm? Using those film gives more spectacular images, but the process of screening becomes tricky.
"During pre-production we tested a lot of lenses with DP Mihai Malaimare Jr. until one day operator Dan Sazaki suggested 70mm, and i fell in love with the results"

Were you aware of the problems raised by this solution?
"I think it was worth it: 70mm gives the story an epic dimension. But I didn't expected it to be this problematic. The movie was first invited both in New York and in Venice, but in NY only the smallest festival theatre was equipped for 70mm. We had chosen Venice anyway where i was guaranteed that I would have an adequate screening. They also had to carry the film by hand to protect it from the trip".

During production The Master was defined by the american press as a Scientology movie. But that isn't mentioned in the movie itself.
"Let me start by saying that in America Scientology is not considered a sect but a religion. And I would like to state that I have not encountered difficulties while shooting, even if the story is inspired by Dianetics, and for a matter of movie setting, indirectly inspired by the historical moment and conditions during which Scientology was born. I want to reiterate that this is a fabricated story: pure fiction."

What fascinates you about that world?
"The emotional and psychological mechanisms that are established between the characters. Also I always wanted to make a movie about Freddie Quell, a lost soul, coming home scattered after the war."

Those entering the sect are considered frightened or greedy.
"Two very common characteristics of human beings."

Lancaster Dodd describes himself as a writer, philosopher and doctor.
"He would add 'but above all I am a man'. And since he's talking to Freddie he would also say 'just like you'."

He's charismatic, but also a showman.
"No man without that charisma can found a religion or a sect. Him being a showman is caused by his American background. But it's not necessarily a bad thing".

Does he believe in his own preachings?
"I would say 'yes', absolutely. I believe he's in good faith."

We saw him with an empatic attitude, even when he hits his pupil.
"I don't make movie to judge, but to tell stories in the best possible ways"

In your movies, religion often appears.
"I'm not observant, but i care about the topic and I keep going back at it. Even when the core values ​​of faith undergo degeneration."

You could have set this movie whenever you wanted age-wise, don't you think?
"The Fifties are a great period for a movie, a moment of hope and pain. Looking back you could see the destruction [of the war] and this is a great source of drama. And also there was some beautiful music in those days."

Have you always thought about PSH and JP for the main characters?
"Yes, the movie would be impossible without them. I can't say that a casted Philip because we have an ongoing collaboration. I'm very happy Joaquin took the role. I already wanted him for Boogie Nights and There Will Be Blood"

How would you pitch this movie to a producer?
"I would say this is a chance to have two great roles".