‘The Master' Confirmed For Venice; Running Time Listed As 137 Minutes 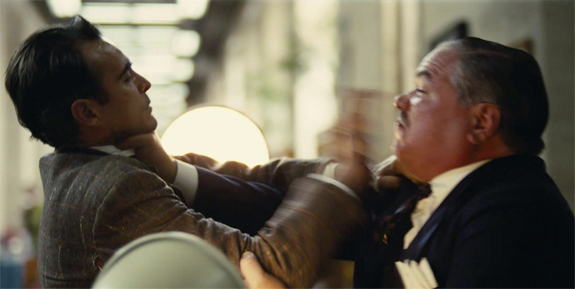 After a rollercoaster of back-and-forth, today the Venice Film Festival confirmed "The Master" is indeed set to play in competition in 70mm, of course. (via @ThePlaylist)

Four new titles have been added to enrich the programme of the 69th Venice International Film Festival (29 August – 8 September) directed by Alberto Barbera and organized by the Biennale di Venezia chaired by Paolo Baratta. The Master, the highly anticipated new film by American director Paul Thomas Anderson (Magnolia, There will be blood) will be the 18th film in Competition at Venice 69th.

The Master will be screened in 70 mm in the Sala Grande (Palazzo del Cinema) on September 1st at 7.00 p.m., in the presence of the director and of the official delegation. The film stars Philip Seymour Hoffman, Joaquin Phoenix, Amy Adams, Jesse Plemons, David Warshofsky and Rami Malek. Paul Thomas Anderson is the 12th director (out of 18films) participating this year for the first time in the Competition of the Venice Film Festival, along with Olivier Assayas, Ramin Baharani, Peter Brosens and Jessica Woodworth, Rama Burshtein, Daniele Ciprì, Xavier Giannoli, Harmony Korine, Terrence Malick, Valeria Sarmiento, Kirill Serebrennikov.


The site lists the runtime being 150 minutes (or 2 1/2 hours) which settles the "is it 2 hours 10 minutes or 2 hours 30 minutes debate from the Santa Monica screening last week. (thanks @prfessorbigsock!)

The LA Times also wrote up a short piece about that screening featuring quotes from several lucky audience members who were there.

Still waiting on TIFF to confirm the film has officially joined the lineup but that should be coming shortly.

And we're still looking for 70mm capable theatres as possible venues for showing the film that Paul & The Weinstein Company may not be aware of. We're aware of the lists that are out there but they are for the most part, out of date, but if you think you can help please head on over to that page for more details.