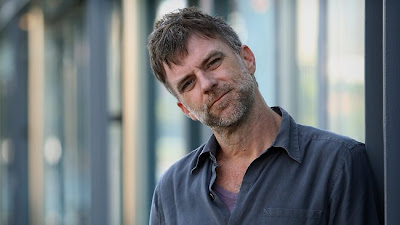 Out to sea with the master and a mangled young man
BY: STEPHEN FITZPATRICK October 31, 2012

APPARENTLY not every journalist has raised the topic of Scientology founder L. Ron Hubbard with writer and director Paul Thomas Anderson in interviews for his long-awaited The Master.
"But that's only because I brought it up first, making it easier for them," the Californian auteur - if ever there were an apt individual for the term, he's it - says, laughing, good-naturedly deflecting the question. Anderson is famous for giving little away about his films beyond what he deems necessary.

The fact the central character in The Master, played magisterially by Philip Seymour Hoffman, is based on Hubbard and the plotline bears an uncanny resemblance to Scientology's early days has been the topic of fascinated discussion in the film world since details of the project began leaking out months ago. Anderson has expressed irritation at the focus even while acknowledging the story's origin.


"But I do know a lot about the beginning of the movement and it inspired me to use it as a backdrop for these characters.""I really don't know a whole hell of a lot about Scientology, particularly now," he said at a news conference after the film's debut screening at the Venice film festival in September.

And although Scientology-watchers have drawn many comparisons between details of the film and the early days and characters of Hubbard's world - the question has particular relevance in the tight world of Hollywood, where the movement flourishes - Anderson resists any suggestion his film is based on a cult.

"I never considered that we were doing anything about cults," he says. "It just never occurred to me. Anyway, one person's cult is another person's movement, is another person's hockey team ... I think the danger becomes when (a movement) is providing answers, when it's not about asking questions or getting people to investigate." The Master is the 42-year-old's sixth feature film since 1996's Hard Eight. Between came Boogie Nights (1997), Magnolia (1999), Punch-Drunk Love (2002) and There Will be Blood (2007), the latter winning two Oscars and deserving, in the eyes of many, a third, for Radiohead guitarist Jonny Greenwood's score - that was disqualified on the grounds that a small portion had been originally written for another film.

There is widespread expectation of further Oscars glory for Anderson with The Master- and this time Greenwood is expected to be standing in line for a statue, as is Hoffman and his co-star, the brilliantly unpredictable Joaquin Phoenix.

That's despite the fact Phoenix has made it clear he doesn't give a toss about Academy Awards success, reportedly telling Interview magazine this month that "I think it's total, utter bullshit, and I don't want to be a part of it". This is, of course, the same man who hoaxed the world in his and Casey Affleck's 2010 mockumentary I'm Not Here, where he announced his retirement from acting to pursue a hip-hop career.

But it's a roguish attitude that sits well with his character in The Master, a demobbed World War II sailor named Freddie Quell struggling with alcohol and violence on his return to civil society, until he falls under the influence of Hoffman's domineering Master, Lancaster Dodd.

The film follows neatly in some ways from There Will Be Blood in that work's deploying of the relationship between wealthy oilman Daniel Plainview (Daniel Day-Lewis) and preacher Eli Sunday (Paul Dano).

In The Master, which begins in 1952, Dodd has assembled around himself a congregation of followers attracted to his book, The Cause, which gives its name to his movement and is presumably inspired by Hubbard's 1950 Dianetics text. Quell hooks up with the group after falling asleep, drunk, on Dodd's yacht. (The Scientology references keep coming, this one a nod to the movement's operations for a time on the high seas to avoid scrutiny.)

Phoenix's performance is electric, amplified by an assumed physical deformity that produces a limp, and downcast eyes seeming to suggest a permanent state of bewilderment.

Anderson says he didn't force his star in creating the character and is on the record in other interviews having wondered while on set whether Phoenix was pushing himself too far. ("There is no such thing as out of character," the director muses on this point. "People are always behaving against their better judgments. They're intuitively doing things that they should not do.")

Quell swings from psychopathic drunken rages in the early stages to a point where Dodd has successfully led him through his "processing" technique into a kind of quiescence whose unnatural calm Anderson describes as "like putting diapers on a monkey".

That is, it can never last, and so it proves to be a limited sort of taming whose frailty we see uncovered through the film's final act. The questions that Quell's state of mind raise about how men come home from war are as pertinent now as they were then.

The biggest difference, Anderson notes, is that there is little of the sense of patriotism that might have motivated a man to serve in World War II. "No one is feeling about what's going on the Middle East the way they felt about World War II," he says. "There's much more ambivalence and confusion - there's no ticker-tape parade through Times Square, some celebration of this victory that's making people feel as if the country's completely galvanised around celebrating this win."

He agrees the post-traumatic stress disorder Quell displays is wound through parts of the US as a result of the past decade of military conflict.

"It seems like we're supposed to know that much more - this idea that, suddenly, don't worry, we now know what might have gone wrong with the World War II generation (and) we now really might have a better handle on PTSD because of what we've gone through with Vietnam, and now we're really in a position to manage all the stresses that you boys will come back with," Anderson says.

"It's just like convincing yourself of a ridiculous idea.

"Because there's no f . . king way. How can you expect it? How can you send someone off to do that and expect them to come back the same?"

The tension of this mental disfigurement in Quell is energised by a barely suppressed homoerotic relationship between him and Dodd that underpins the entire work: as Anderson continues to insist, it's not a film about Scientology as much as it is a film about the turbulent relationship between these two men. Amy Adams as Dodd's wife also plays an important role in that dynamic.

As to next moves, Anderson is working on an adaptation of Thomas Pynchon's novel Inherent Vice, which he describes as being "like working with a Rubik's cube and the endless possibilities and combinations of how things can go". The work of the American writer, whose fiction is as dense and complex as any of Anderson's films, is providing an "education".

"Just when you thought you were becoming a good writer, to just see how he does things and to look at the combinations of words that he can put together, it's so inspiring and it brings you back down to realise that you've got a long way to go," he says.