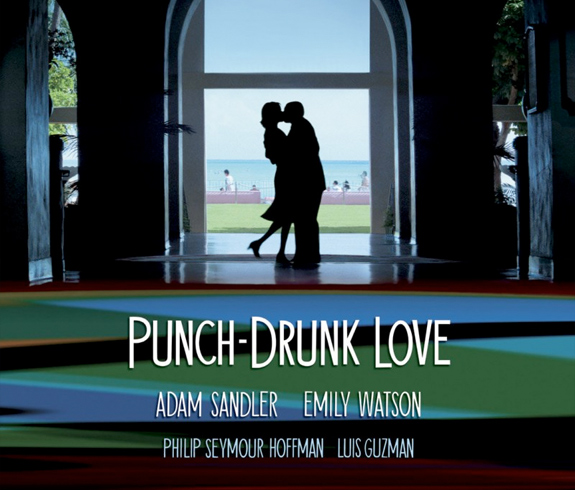 "Punch-Drunk Love" was released ten years ago today on October 11th, 2002. If you weren't lucky enough to have caught Paul Thomas Anderson's 4th film when it debuted at Cannes (where Paul won the Best Director prize), you had another agonizing 5 months to wait. During that time the film picked up even more acclaim at festivals in Toronto, Chicago and New York. Paul's longtime producer JoAnne Sellar said of the film's genesis, "After 'Magnolia', which was a huge, dark, challenging movie. I think Paul wanted to make something that was contained, uplifting and sweet." Prior to its release it was impossible to imagine what a "90 minute Adam Sandler romantic comedy" would look like through the lense of Paul Thomas Anderson. But after you see the film, wonderful and strange as it is, you can't imagine it any other way. The film was not a commercial success and was snubbed at the Academy Awards despite being one of the best reviewed films of that year. In retrospect, the film is a pivotal one in Paul's career, marking the transition from his earlier tightly controlled films to his later more improvisational efforts.

To celebrate "Punch-Drunk Love"s 10th Anniversary, take a stroll down memory lane on our "Punch-Drunk Love" info page. There you can find interviews, production notes, artwork, trivia and more.  We'll be posting some archival bits and pieces throughout the day on Twitter so stay tuned.

I saw "Punch-Drunk Love" on opening night at Loews Lincoln Square in NYC. I was going to college in Philadelphia at the time and rather than wait another week, I decided to drive up to New York with a few friends to catch the first evening show. The film was nothing like I'd expected but I loved it all the same and proved that the filmmaker who had made "Boogie Nights" and "Magnolia" was capable of doing something different, wildly different even, than critics, fans and audiences had expected. I saw the film several more times in theatres and one final time the following summer at a BAM screening in Brooklyn with Paul and Philip Seymour Hoffman in attendance.

Where did you first see "Punch-Drunk Love"?
What are your favorite moments from the film?
Leave a comment below or use the hashtag #PunchDrunkLove10 on Twitter.