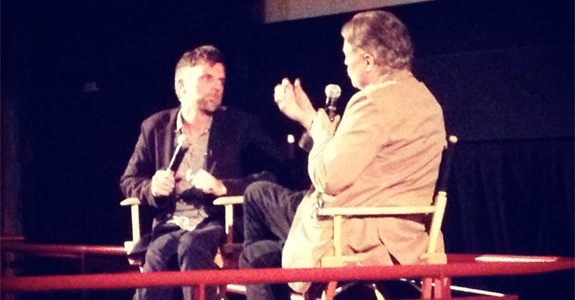 Last week we told you that while PTA was in NYC for his whirlwind press tour, he also stopped by the Village East Cinema for a quick Q&A with his friend/hero, filmmaker Jonathan Demme. Though we weren't aware of the event beforehand, we did learn that the Q&A was definitely recorded so we can assume that the footage will make its way online soon or perhaps included on the DVD/Blu down the line. Until then, a reader was kind enough to send in a detailed recap of the event which is clearly the next best thing. If you haven't seen the film yet, there are spoilers below.


Here's what they said:


1. Demme first talked about PTA about his father Ernie and what it was like growing up around such major VO talent. Then they talked about how Ernie Anderson played Ghoulardi, a horror film TV host in Cleveland I think, and whether or not PTA gravitated toward the entertainment world based on his dad's inclusion in it. PTA seemed to share that he was always interested in film and didn't necessarily garner an appreciation for cinema by tagging along with his dad/sitting on his lap, etc.

2. Demme and PTA discussed the naked ladies scene, of course. Demme figured it just to be a swinging cult party and assumed that type of behavior would naturally go on in such circles but PTA discussed it as a dream/vision of Freddy's which is how it came across to me.

3. He sung the praises of Greenwood and discussed a little bit about their process. He said he usually sends Greenwood a rough cut when the film is part way edited to allow him to see where he is going. Because of the distance between their working cities, he was sad that he couldn't spend more time watching Jonny's work unfold in real time but considers him an incredible professional. He also said he gets notes from Greenwood on the film itself (its structure, editing, etc.) and that he values his input in that arena as well.

4. A kid in the audience who had seen THE MASTER that night for his fifth time asked about the parallels in the names of Lancaster Dodd and Winn Manchester (the cherubic lover at the end) and if it was intentional that he leaves one for the other yet their names are somewhat mirrored opposites. He said if that was the case, it was unintentional and he'd have to think on it.

5. The film as it appears to us was mostly "written," with little improv. Although the scene in jail apparently was improvised, somewhat. Apparently PTA, Phoenix and Hoffman had discussed what would happen in that scene maybe three times before and then on the day they didn't even discuss it and just went for it. [I *think* he said they got it in the first take.] Also, there were times where Phoenix asked to cut some of this lines out -- maybe in a scene where he was walking -- and PTA said, "You're right, we don't need them there," in a few instances. [From PTA's perspective mind you, PTA seems incredibly collaborative and relaxed on set. I did see the premiere at the Ziegfeld and Amy Adams was there and mentioned how it was fun. Who knows.]

6. About writing process: He starts writing from the beginning of the film in his mind and doesn't have an outline in front of him. He writes until he thinks he has finished and then he revises. Sometimes what he has written is "right" from the first draft and other times it takes 40 drafts to land on what is best. He also mentioned the writing process taking about 6 months for him -- I wasn't sure if he meant that in general or particularly about THE MASTER.

7. He is going to adapt Pynchon's INHERENT VICE next. Considers THERE WILL BE BLOOD as an adaptation (his first) even though he added that Sinclair's OIL! and his film were drastically different.

8. He talked about working as the standby director for Altman on A PRAIRIE HOME COMPANION and how he was honored to be what he considered (in a loving way) the legs and mouthpiece for Altman who was ill at the time. Altman would tell him, "Go tell Meryl not to do that hand thing," and he would go and say, "Hey Meryl, Bob doesn't want you to do that hand thing." [Brilliant. He seemed like a beaming errand boy telling this story.] The insurance company wouldn't bond the film because of Altman's failing health concerns so PTA was brought on to sit right next to Altman every day. And learn.

9. He talked about "throwing away the script" when he got on set. He hires great actors and hopes that they have already memorized their parts so that he can work on the other responsibilities and instincts he has as director.

10. Oh, and he wasn't sure what Phoenix was going to do in the scene where he and the heavy set dude getting his photo taken get into a tussle. What you see there is what happened instinctually between the two actors and he gave a lot of credit to the man who was being hyper-lit (the actor's name escapes me here, sorry) and harassed by Freddy.

Many thanks to the reader who sent that along and to @AlanBThompson for the photo. A few of you have noted that teaser & inkblot posters are available for purchase (via TheMasterFilm.com) though we would still suggest winning one instead in our Gone To China Contest. This is your last week!