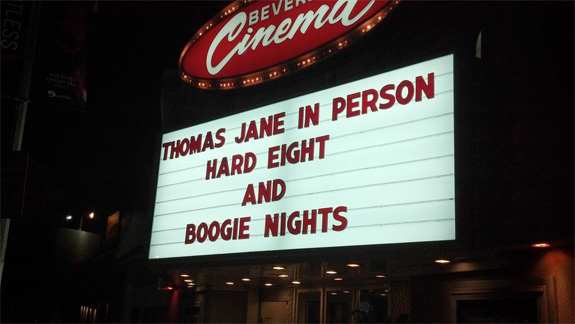 The New Beverly Cinema in LA is currently in the middle of their Paul Thomas Anderson retrospective showing all 5 of his films prior to "The Master." (Which we could've sworn we posted about but it looks like we've only been talking about it on Twitter.) Over the weekend the theatre screened a double-feature of "Hard Eight" and "Boogie Nights" with a special Q&A inbetween with Todd Parker himself, actor Thomas Jane. Reader @westernwilder was kind enough to tape the full Q&A for us where Jane where he discussed being a broke actor in LA, auditioning for the film and getting kicked in the balls by Burt Reynolds. Watch the videos below:

Lucky LA-ers can still catch "Magnolia" tonight and "Punch-Drunk Love" and "There Will Be Blood" tomorrow and Wednesday. And believe me, if this were happening in NYC, I'd be at every one of these. (Thanks @TommyRubendall for the image.) In related news, there are two Paul Thomas Anderson milestones coming up this week. Can you guess them?

Enter our Gone To China Contest to win a copy of "The Master" soundtrack!