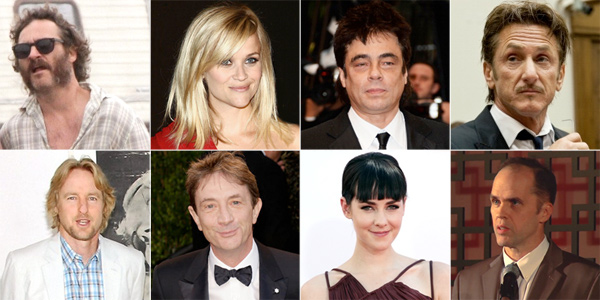 Almost 2 years to the day after "The Master" began shooting back in 2011, "Inherent Vice" is ready to go before cameras today. The 7th film by Paul Thomas Anderson centers on a pothead private eye named "Doc" Sportello (Joaquin Phoenix) and his hazy adventures in late 60's Los Angeles among a large cast of eccentric characters.

'Vice' is the first authorized adaptation of any of author Thomas Pynchon's work and PTA (in performing his second adaptation after "There Will Be Blood") has stated that this time he'll hew much closer to the source material, which is an embarrassment of riches. ("It's like somebody dumped bags of gold in front of me and I can only take so much with me. What do I do?")

PTA has described his vision for it as being like "a 'Cheech & Chong' movie" but those who know his work can probably guess it'll end up a million miles from there. This will easily be his starriest cast since "Magnolia" featuring a mix of PTA veterans and first-timers with many more major roles yet to be announced which reveals he may also be taking inspiration from the star-studded satires of the late '60s.

After a 5 year gap between his previous 3 features, a 2014 release would make 'Vice' will be the shortest window between PTA films since "Boogie Nights" (1997) to "Magnolia (1999). To help you keep track of all the latest news on the project we've launched our "Inherent Vice" info page which we'll continue to update throughout production.

It doesn't have a home yet on the nav bar, but for now you can find it here and at the bottom of every post. Currently the page features a synopsis, work-in-progress cast & crew listing, trailer for the novel (narrated by Thomas Pynchon) and a brief timeline of the project which dates all the way back to 2010.

Find more information about the film on our Inherent Vice page.
Stay tuned to Twitter and Facebook for the latest news and updates.

NOTE: Site contributor Cory, who wrote this update, has moved onto other endeavors. I speak on behalf of the readers in saying the 3 years of assistance & effort provided to the Vines is/was greatly appreciated. Best, CJW
Posted by modage at 5/30/2013 10:45:00 AM