Today, Nonesuch released a cut off of the Inherent Vice Original Motion Picture Soundtrack, due out December 15, available for pre-order here.

The song, as previously reported, is a reworking of a previously unreleased Radiohead song called "Spooks" by the fellas in the English band Supergrass, with dashes of Joanna Newsom's narration from the film (and the book) tossed in to make a tasty mix.

We seem to be having an issue embedding the track, but you can find it here.

In other news, PTA did an interview with Metro, wherein he was pressed about the supposed Pynchon cameo in Inherent Vice. As usual, PTA played it pretty cool but it did lead to him offering up his own artistic rendering of what the famously reclusive author looks like. This excerpt brought to you by xixax:

I know it's impossible to really know, but is Pynchon in the movie? There was rumor of a cameo.

Can you put a dollar amount on how many tickets might be sold to Pynchon freaks who have to see? Chances are they could come back 50 times, buying a ticket each time, and that, you know, that's a lot of money that we can't just throw out the window, so we have to keep … (laughs) He's absolutely in there somewhere! You just have to keep coming back to find it! I wish you all luck.

Well, could you draw me a picture of him?

There you go. (laughs) 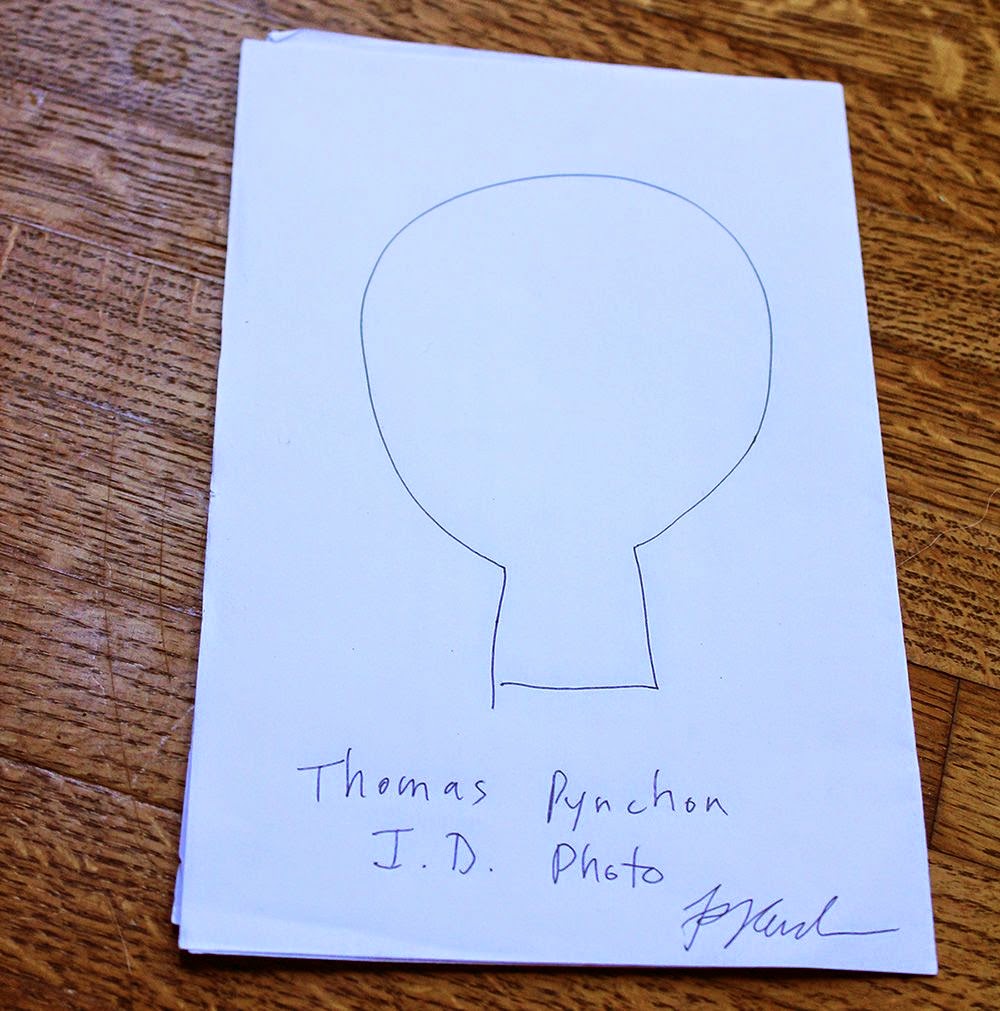 
It was two things at once. It was, "I don't know how to do this and I can't do this, but no one else is going to be allowed to do this but me." I love and have loved his work for a long time. I flirted with trying to do "Vineland," I certainly thought for a second "Mason and Dixon" could be done — and maybe someday still will. But this presented itself as doable, as a great lead character weaving through many other great characters. And I loved how many girls there were in it, too. There's so many great parts for girls, and getting your hero to interact with all of them — and most of them are half-clothed. That just seemed so appealing. I was like, "OK, there's enough," but all the while convincing myself that I shouldn't do it, that I shouldn't make another L.A. movie, that I don't need to do this again, but as you're typing, it's kind of like a drug addict who's just like, "I really can't have another drink" while reaching for his glass. It was too hard to resist.

So there you have it. After the release of Inherent Vice, PTA and Pynchon may not be parting ways forever. Time shall tell.

There's plenty of other great stuff in that interview, including one particularly sweet anecdote about the decision to include a song by Maya Rudolph's mother Minnie Riperton on the soundtrack. Read the rest of it here.

- In other news, the wonderful Grantland article we posted yesterday about the Los Angeles locations used by PTA thus far is actually only but a single installment in an entire week of PTA appreciation leading up to the release of Inherent Vice. Today's piece is an [exquisite] oral history of Boogie Nights and it can (and should) be read here.

- Finally, this dropped on YouTube a few days ago and a few of you have been kind enough to pass it along. That's right: the FULL PTA/Robert Carl Cohen Q&A that followed the screening of Cohen's documentary Mondo Hollywood at the AFI Fest last month. Watch, watch, watch:

In addition to any Vice-related news that might pop up between now and then, we will have a pretty cool Flashback Friday for you (we have not yet made the full conversion to #tbt) so keep your eyes peeled for that this weekend.

(One last thing: I (Bryan) am STILL composing a piece about my experience at the Ace Hotel screening of Inherent Vice last week and I will be dead if it's not posted sometime this weekend. You'll forgive the delay, the whole ordeal was the best kind of whirlwind and it gave me a lot to think about.)
Join the film on Twitter at @seeinherentvice
On Facebook
And at www.inherentvicemovie.com

Find more information about the film on our Inherent Vice page.
Stay tuned to Twitter and Facebook for the latest news and updates
Posted by Bryan at 12/10/2014 09:16:00 PM