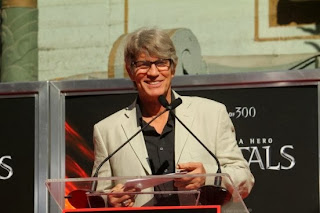 Friends, it has been far too long. We have a bit to get caught up on.

Firstly, if this October 6th edition of The Dr. Drew Podcast is any indication, it would be appear that Eric Roberts is also going to be in Inherent Vice. He has some brief, nice things to say about the experience of working with PTA, but keeps it mostly very (very) tight-lipped. The good stuff comes in around 15:20, and here's our loose transcription:


What's coming up for you?

No idea when it's coming out.

She has no idea. So we're not helping you, bud. Sorry.

We will -- we will post it when we find out.

But -- but that was a great experience, and you know, and, and uh... and making movies these days is a lot like making instant coffee; it is fast and it is not particularly tasty. And uh... but working with him was like the old days.

As you can probably guess, we have not been able to surmise who Mr. Roberts will be playing in the film, as it seems pretty deliberately under wraps. Time shall tell. Thank you to the number of followers who passed this along to us today!

In other PTA related news, SplitSider is currently running a story called The Lost Roles of Anchorman, which chronicles the various incarnations and collaborations of Anchorman: The Legend of Ron Burgundy that never came to pass. Much to our surprise, Paul has a spot on the list, and not a particularly dismissible one at that. The story purports that Paul was in early talks to produce the film prior to making Punch-Drunk Love, and even has a direct quote from Will Ferrell on the matter:


He was the reason why we wrote the script. 'Cause he had read a script Adam [McKay] and I had written called August Blowout that he thought was really funny and it was stuck at a studio and they weren't making it... To his credit... very nice of him, [he] loved that script. He said, "Why aren't you making this? What if I help you guys get something made? You just write whatever you want and I will be the producer. So, we wrote Anchorman on spec. He was kind of the impetus to get it going. He went on to do other things. Punch-Drunk Love. But he got the ball rolling for us.

You can listen to the audio of the interview that quote was lifted from here, it being pretty much the first topic discussed. The story lists Maya Rudolph and Bill Macy as ones to hit the chopping block before production started in earnest as well (Thanks to Joe for passing this along!)

Also in order is a big (albeit belated) celebratory note about the 16th theatrical anniversary of Boogie Nights, which happened on October 10th. Director Jason Reitman, who hosted a live-read of the script for 'Boogie' at TIFF a few weeks back, directed another read of it on the 10th at LACMA with some new faces. The cast for that reading was as follows:


Mae Whitman in the role of Rollergirl, originated by Heather Graham

Kevin Pollak in the role of The Colonel, originated by Robert Ridgely

Jim Rash in the role of Buck Swope, originated by Don Cheadle

Jarod Einsohn in the role of Todd Parker, originated by Thomas Jane.

Jurnee Smollett in the role of Jessie St. Vincent, originated by Melora Walters

Judy Greer in the role of Amber Waves, originated by Julianne Moore

Nat Faxon in the role of Scotty J, originated by Philip Seymour Hoffman

Nick Kroll in the role of Reed Rothchild, originated by John C. Reilly

Don Johnson in the role of Jack Horner, originated by Burt Reynolds

Taylor Lautner in the role of Dirk Diggler, originated by Mark Wahlberg

It's not too late to sneak in a viewing of Boogie Nights in honor of the fact that it's another year older and another year wiser, until later this week week, when we'll have another anniversary to be posting about.