‘The Master' Not Playing Venice Or TIFF 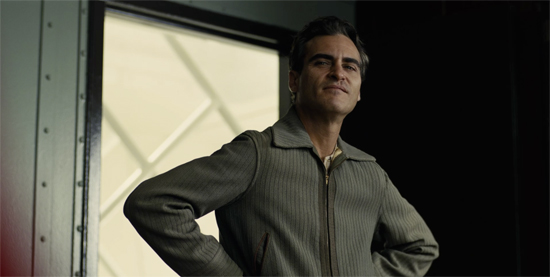 Over the last two days the lineups for Toronto and Venice Film Festival's have been unveiled and it looks like neither one managed to score "The Master." Though TIFF seemed like a long shot in recent days, Venice came as more of a shock. We knew that the festival was chasing the film along with the new efforts from Terrence Malick and Brian DePalma, and while it looks like they got their other two choices, PTA's latest is the whale they just couldn't catch. Curiously (and probably frustratingly for those attending) Variety had initially announced "The Master" as being part of the lineup only to retract that statement shortly afterwards. (via @ThePlaylist) Anybody know what happened there? Please pass it along.

Update 8/27: Festival director Alberto Barbera says the film will not play the festival. “I didn’t mention the film. Nobody mentioned the film. It is not in any of our sections.” (via @manuyanezm)

Update 10:40am: A commenter informs us that Venice Festival Director "Alberto Barbera said at the press conference there is one more movie in competition that will be announced in the next few days." So it's still possible "The Master" could bet that film. Standby for heart-attack.

And then there were two. Back in March we ran down the odds on which festivals we thought were most likely to land the film and at the time gave the New York Film Festival the best odds while calling Fantastic Fest a long shot. Obviously some new information has come to light which seems to tip the scales in the other direction. Though it is possible, it doesn't seem likely that the film would play at both fests. (It should be noted that "Melancholia" did this last year but had also played at Cannes, TIFF, opened in France and premiered on VOD by that time too.) Because NYFF is so late in the year, it's really the last major festival and the selection is usually culled from Cannes favorites and a few repeats from Venice/TIFF with a few high profile premieres sprinkled in.


While we have no doubt they're trying to at least get a peek at "The Master" for inclusion in their lineup, their tastes can be a little baffling sometimes. (For example, in 2010 they scored Premieres for "Hereafter" and "The Tempest" while turning down "Black Swan," which was filmed at Lincoln Center where the festival is held.) So nothing is a sure thing. (Remember that "There Will Be Blood" did not premiere there in 2007...) Of course there's there's the possibility that PTA has decided to skip all the major fall festivals. Here's what we said back in March...


"There Will Be Blood" sidestepped all the major Fall festivals and still went on to being PTA's highest grossing and most acclaimed film. "The Master" isn't going to have any trouble stirring up attention and traveling the festival circuit also runs the risk of 'peaking too early. If the team behind the film just decide to have a couple of screenings (like they did for "There Will Be Blood" at The Castro in San Francisco and secretly in Austin), that would be just fine with us. With the curiosity surrounding the film - it appeared on nearly every site's Most Anticipated list for 2012 despite not even knowing at the time that it would be released this year - the festivals probably need the film more than it needs them.

As much as I'd like to see the film premiere at NYFF for selfish reasons (I live here), there's something kinda cool about Paul doing his own thing and premiering it in Austin instead. The NYFF lineup should be announced in the next few weeks, so we'll know for sure soon.