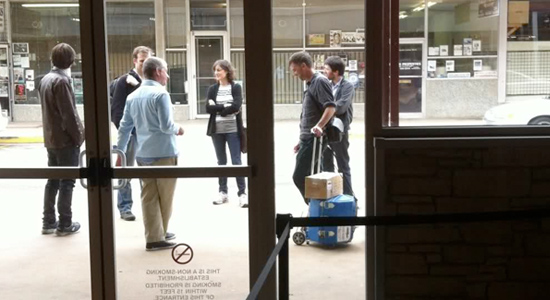 Today we have a big round-up of news for you. So if you were busy watching the trailer all weekend as we were, you may have missed a few exciting (if less seismic) developments. First off, in my other life over at The Playlist, I posted a somewhat lengthy trailer breakdown for those who might not be as up on the film as Cigs & Vines readers. I wanted to give a big thank you to our commenters (Tyler, anonymous, etc.) for all their help fleshing out the article. If you havent' read it yet, head on over and take a look and if there's anything else I left out, please let me know kindly in the comments.

Financier/patron saint of cinema Megan Ellison tweeted the following heartfelt thank you to Paul but since he doesn't have Twitter, we'll repost it here in hopes that it gets back to him.


Paul Thomas Anderson and The Master have changed my life in such a deeply profound way forever that all I can really say is, thank you.

Kirsten Dunst, who's dying to get into a PTA movie, also tweeted, "I'd give Joaquin Phoenix an oscar based on the trailer for "The Master."" to which Ellison responded "and you wouldn't be wrong to." A few other famous friends expressed their admiration of the trailer over the weekend as well including "LOST" co-creator Damon Lindelof ("I just watched THE MASTER trailer and I think it made me crazy.") and "Brick" writer/director Rian Johnson ("Dude I just watched THE MASTER trailer like 138 times in a row dude dude DUDE")

In other news, we recently heard whispers that a couple weeks ago Paul was in Austin testing the sound for "The Master" at the Alamo Drafthouse. Our sources say he had a soundboard set up testing levels and at the top of this post there's a picture (via Tumblr) to prove it. You can see Paul standing alongside his composer Jonny Greenwood, Alamo Drafthouse owner Tim League and a mysterious blue canister that may or may not contain the greatest film of 2012. Rumors are flying of a possible Fantastic Fest premiere as you'll remember "There Will Be Blood" had a secret screening/premiere there back in 2007.

Update 7/23: A commenter with the inside track says, "It was more than just sound tests. The finished film was screened for League weeks ago. It is already booked to play Fantastic Fest. Take that to the bank." Fantastic Fest runs September 20-27.


In other festival news, TIFF starts announcing their lineup on Tuesday and Venice has announced its opening night film with the rest of the lineup being announced in the coming weeks. We already know Venice is gunning for the film so we'll see if their efforts are successful.

A small but avid group of PTA fans has insisted they've spotted him in the trailer standing in the elevator just behind his principal cast. Despite a resemblance we have a hard time believing he'd place himself in such a distractingly obvious place in his own film as that just doesn't seem like his style. "Magnolia" cameos aside...

And finally, The Daily Beast posted a semi-spoiler-ish article where a Scientologist read through the old leaked draft of the screenplay and compared notes between Scientology and The Cause. Short version: lots of similarities.