‘The Master' Moves Up To A September 14th Limited Release 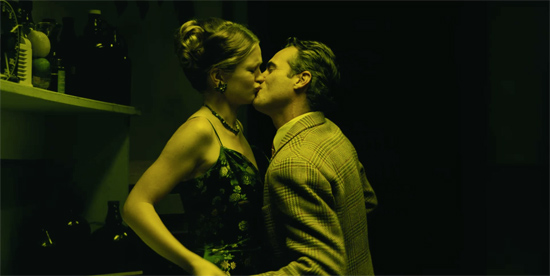 We did not see this coming. Goodbye October 12th. Hello September 14.

Variety says (via The Film Stage):


The Weinstein Company is shuffling its awards-season deck, moving up Paul Thomas Anderson's Scientology-tinged religious drama "The Master" to Sept. 14 and pushing back Andrew Dominik's Brad Pitt starrer "Killing Them Softly" to Oct. 19.

"The Master" figures to be a factor this awards season, with stars Joaquin Phoenix and Philip Seymour Hoffman expected to be major contenders for acting prizes, not to mention writer-director Anderson, who received multiple noms for his last pic, "There Will Be Blood."

So what does this mean? It means that the film will be open in limited release (probably NY/LA) before the start of the New York Film Festival and also before Fantastic Fest. So Paul wasn't kidding about not being crazy about the festival circuit. We can only imagine how he pulled this off with the Weinstein's, but bravo. Harvey spoke to The Huffington Post yesterday and offered the following (via @IronMcClung)...


In keeping with the party line, Weinstein declined to confirm the Scientology connection. "Paul says to me the movie is about a journey for soldiers after World War II – my own dad was one of those guys – and, you know, one of the things that happens to this soldier is he goes to a cult," he said. "Look, I mean, whatever, people are going to draw their own conclusions, and right now there are heated conclusions, and the Tom and Katie situation has exacerbated that. It’s going to be a controversial movie. But it’s a tour de force. I hope what doesn’t get lost is how wonderful the filmmaking is."

Asked if there were still a chance "The Master" could make its debut at the Toronto International Film Festival, which kicks off on September 5, Weinstein said it depends on whether Anderson could prepare a 70-millimeter print in time. "He’s a filmmaker, not a video filmmaker, and I really hope that doesn’t get lost in the controversy either. He’s really trying to preserve a lost art."

Not sure if we're really buying the "having a print ready in time" excuse but it's fun to play this game. It's still possible the film could be a late addition to TIFF (running Sept 6-16) and it does look like there will be some kind of Austin screening, whether that runs during Fantastic Fest (Sept 20-27) or as a standalone before the film opens is yet to be seen. If we had to guess we'd lean towards the latter. The good news is, no matter where you live, you'll probably be getting a look at the film a little sooner. We couldn't be more excited.