‘The Master' Opens Strong In Wide Release With $5 Million 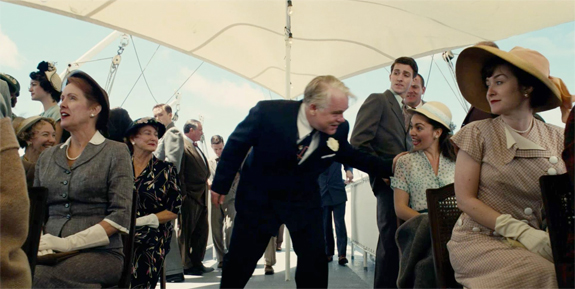 Box Office Mojo reports that "The Master" continued to perform strongly in wide release collecting an estimated $5 million this weekend from 788 theatres. That puts the film in 7th place for the weekend just behind "Dredd" which opened in around 1800 more theatres and gives it the highest per screen average of any film in the Top 15 this weekend. (For comparison, this opening is a little higher than "There Will Be Blood"'s $4.8 million back in 2007 during its second week expansion.) Congrats to Annapurna Pictures & Weinstein Co. on the film's success so far and let's hope that the desire for repeat viewings keeps the film doing well in the coming weeks.

Speaking of repeat viewings, Slate critic Dana Stevens wrote up a magnificent piece where she re-reviewed the film after watching it a 2nd and 3rd time.


"There’s something deeply and irreplaceably pleasurable about revisiting a complex, ambitious film a few times in close succession on the big screen if possible, and letting each iteration inform and expand on the last. Having gotten the chance to do so this week not only deepened and transformed my experience of this particular film, it reminded me why I started wanting to think and write about film in the first place."

Read the entire thing over at Slate. Two new TV spots featuring some new footage (though not new if you've seen the film by now) are up at Fandango. (They also feature some inadvisable narration so perhaps worth watching just for that.)

If you haven't already you should check out our Deleted Scenes guide to look at all the material that made it into the teasers and trailers but not the final cut. And be sure to enter our Gone To China Contest to win Jonny Greenwood's soundtrack and perhaps some other things we may decide to throw in.

I caught the film for a 5th viewing over the weekend at the grand old Ziegfeld Theatre just to continue my tour of seeing it across all of NYC's 70mm venues. How about you? Did you see the film more than once? How was your first/second/third viewing? Sound off in the comments.