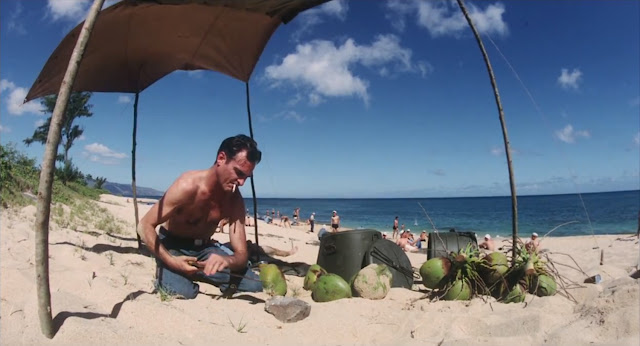 While we're incredibly grateful that "The Master" crew decided to grace the rest of us with the first teaser trailer for the film this morning, critics in Cannes were even luckier. Invited journalists were invited to Weinstein Company party showing off footage from "Django Unchained," "The Silver Linings Playbook" and most importantly, "The Master." While some wondered this morning if they would be shown the same footage in the teaser, that was not the case. They were treated to about 4 minutes of scenes from the film total and got apparently a much broader look at the film with scenes featuring Philip Seymour Hoffman, Amy Adams and more.


“The Master” seems destined for controversy. Paul Thomas Anderson has written a tale that is loosely inspired on the life of L. Ron Hubbard, the founder of Scientology. The short piece shown was enough to suggest that Anderson (“Magnolia,” “There Will Be Blood”) has again taken on an epic subject and will face it down fearlessly.

Philip Seymour Hoffman, in moustache and suspenders, plays The Master, the Hubbard-like leader of what is referred to as The Cause. Amy Adams, in fierce dramatic scenes, plays his headstrong wife.

Joaquin Phoenix is the center of the story as a postwar drifter, searching for a path and racked by anguish or mental illness or both.

In one scene, The Master demands: “Is your life a struggle? Is your behavior erratic?”
It looks ambitious and exciting, though no frogs appear to fall. Remains to be seen what the never-shy Church of Scientology will have to say about this portrayal, however fictionalized

I like it that it flies in the face of recent Academy tradition of safe, sappy fare. It throws down gasoline and lights it on fire. The music, Phoenix completely out of his mind jerking off on the beach with people nearby. And there will be blood, sex, sweat and tears. Anderson is a ferocious, creative mind at work — this is a deepening for him, not a detour.


While a teaser trailer gave everyone a taste of what to expect earlier today, at Cannes we got a lot more footage from the film which again looks like another unique, cinematic world conjured by Paul Thomas Anderson. Starting with the voiceover and similiar bits of the same pieces from the trailer, the footage unspooled showed much, much more from the film. The first thing to note was that Joaquin Phoenix's character, named Freddie Sutton in the script leaked last year, is now named Freddie Quell. Falling along the general plot we already know, Freddie comes in the orbit of the enigmatic leader of a -- religion? cult? -- led by Philip Seymour Hoffman. And let's be clear -- while the name Scientology isn't mentioned, this is clearly very inspired by the religion. While in recent months the production has taken steps -- perhaps for legal reasons -- to avoid drawing direct parallels, it's something that's going to be very hard to deny.

Wearing a pencil moustache and carrying an air of ambition and importance, not only does Hoffman look like L. Ron Hubbard, in the reel we saw, he describes himself as (among many other things) a writer, doctor and theoretical physicist. Those are all terms that have been used to describe Hubbard over the years. And there are more clues throughout, including some scenes from a very confident looking Amy Adams, who plays Hoffman's wife Mary-Sue, saying that the the "only way to defend ourselves, is to attack." Sound like any lawsuit happy religious group you've heard of? And the final scene we were shown might as well be from an auditing session, with Hoffman's leader peppering Freddie Quell with a serious of personality test style questions.

Visually, it looks fantastic with a graininess and color scheme that seems inspired by Technicolor/'50s film. And remember, this was shot on 65mm stock which is why we're seeing the kind of texture we get less of in this increasingly digital world. The footage we saw also opens with a great, slow dolly shot down a hallway that was immediately reminiscent of something Stanley Kubrick might have done. The score throughout was the same as was heard in the teaser trailer, though with some added strings in the same atonal universe as "There Will Be Blood." The cast overall looked universally strong with Phoenix, Hoffman and Adams highlighted. Freddie is portrayed as very much a wildman in what we saw, with Adams noting, "perhaps he's past help...or insane." With this line of dialogue followed by a shot of Freddie with his trunks pulled down, masturbating on the beach.

Overall, it was the best footage of the Weinstein lot, promising another Anderson outing that will be memorably distinct and fascinating work.


While the footage online only features Joaquin Phoenix (unrecognizably sinewy and retro-looking, like a wilded-out Montgomery Clift), the clips we saw also heavily featured Philip Seymour Hoffman and Amy Adams as a Hubbard-like religious leader and his determined wife, respectively. As good as they looked, though, the presentation truly appeared to be the Joaquin show, featuring the actor (who plays an aimless sailor given purpose by Hoffman's cult) in a series of hallucinatory, color-saturated sequences while Hoffman and Adams determine how best to save him. There's a lot more PSH to this story than they're showing us, but no matter what, it's exciting stuff.


The Master reel was exciting but it's clearly going to be a complex, out-there drama that doesn't play the game. An "audience film" if the audience is filled with people like myself and Drew McWeeny, James Rocchi, Sasha Stone, Ira Parks, Anne Thompson and Pete Howell, but I don't know about Joe Popcorn...but who knows? The sound was too loud. I couldn't hear half the things that Phillip Seymour Hoffman was saying. The footage was longer and more varied than the currently-up teaser. Hoffman is clearly going to be the charismatic megalomaniac -- confidence, swagger, drill-bit eyes. Joaquin Phoenix and Amy Adams , it appears, are going to fully alive and beating with the heart pump.

The Master made the strongest impression on me and for those of you that have already watched the teaser I've included here to the right, this was how the footage I saw began although, while using the same voice over, different footage from the film was shown instead.

It's still Joaquin Phoenix's character, Freddie, a drunken Naval officer speaking with his superior, but one shot in particular is a long dolly shot, rolling in closer and closer to Freddie as he approaches a bulletin board. He stops and begins writing on a piece of paper, finishes and heads back down the hallway, the way he came, as the camera continues dollying forward and past what he's written. "Gone to China."

The footage not seen in the teaser includes co-star Amy Adams and lead actor Phillip Seymour Hoffman as Lancaster Dodd, the titular "master", a man claiming to be many things including writer, doctor and philosopher and he has attracted Freddie's attention. Dodd is a man who's witnessed the horrors of World War II and tries to rediscover who he is in post-war America and creates a belief system, something that catches on with other lost souls.

A lot can be taken away from the small amount of footage that was shown, which must have totalled somewhere around four minutes. For starters, the performances look excellent. If this film is as good as this trailer leads me to believe it will be, we may be talking about three Oscar nominations for acting alone. Jonny Greenwood, who scored Anderson's There Will be Blood, is also back for this one and his music suits the mood beautifully.

Along with the dolly shot mentioned above, I found several of the shots to be interesting as Anderson and his cinematographer, Mihai Malaimare Jr. (Tetro), seem to focus heavily on close-ups, particularly a nearly hypnotic moment featuring Adams speaking directly into camera saying, "Look into my eyes."

Finally, while there have been denials that this film has anything to do with Scientology, I'm not really buying it, particularly based on Hoffman's introduction as Dodd.

Overall, the themes it looks like this film will be exploring will run deep with plenty to chew on as you walk out of the theater.

@JamesRocchi: Also, the Johnny Greenwood score over THE MASTER footage we saw is the percussion-laden sound of paranoia rattling in your head.

@Jake_Howell: THE MASTER looks actually very good - a 2012 film with a 90s film aesthetic (watch AMERICAN BEAUTY and you will understand) #Cannes

Check out a video blog via First Showing discussing all 3 films below.

Keep checking back and we'll update this post as the other reactions come rolling in.

In the meantime, check out the photos from the teaser in our Facebook gallery and stay tuned to Twitter for the latest news and updates.
Posted by modage at 5/21/2012 11:27:00 AM