When good luck is a long shot, you have to hedge your bets.


Sydney (Philip Baker Hall), a gambler in his 60s, finds a young man, John (John C. Reilly), sitting forlornly outside a diner and offers to give him a cigarette and buy him a cup of coffee. Two years later, John, having gotten the money for the funeral, has stayed in Reno and become Sydney's protégé. John has a new friend named Jimmy (Samuel L. Jackson) who does security work, and is attracted to Clementine (Gwyneth Paltrow), a cocktail waitress dating John. John and Clementine get married, but later Sydney gets a frantic late-night phone call. He arrives at a motel to find the newlyweds holding hostage a customer refusing to pay Clementine, who moonlights as a prostitute. 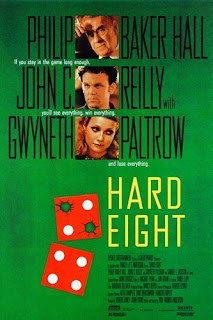 Hard Eight marks the feature film debut of newcomer Paul Thomas Anderson. Written and directed in a taut film-noir style by Anderson, Hard Eight is a tale of love, revenge and redemption. Set against the seedy casinos of Reno, Nevada, it is the story of a seasoned gambler whose friendship with a young man is threatened by a dark secret from his pasts. The ensemble cast features Philip Baker Hall, John C. Reilly, Gwyneth Paltrow and Samuel L. Jackson.

Anderson has always been fascinated with the underbelly of Nevada's glittery gambling casinos. Also an admirer of film noir, two of his favorite were shot in Reno: "Born to Kill" and "5 Against the House." Therefore it comes as no surprise that his first feature film, Hard Eight, and a previous short entitled Cigarettes and Coffee, were set in that world and embody the elements of classic film noir with some modern twists.

Anderson's passion for filmmaking began at an early age and as soon as he was old enough, he began working as a production assistant on music videos, small independent films and television movies. He was working on a PBS special when he met veteran character actor Philip Baker Hall and passed him the script for Cigarettes and Coffee, his first short film. After reading it, Hall immediately decided to get involved.

Cigarettes and Coffee, a 24-minute film about five characters in a coffee shop outside of Las Vegas who play out their destiny, was premiered at the 1993 Sundance Film Festival Shorts Program and garnered the young Anderson a great deal of attention. Some of it was from the Sundance Institute, which after discovering he had written a feature film, invited him to return and participate in the June Directors Lab later that year, an invitation he readily accepted.

That script became Hard Eight. The leading role of Sydney had been written specifically for Philip Baker Hall, who agreed to attend the month-long lab with Anderson. Each participating director attends with two actors, so Anderson met with John Lyons, casting director for the lab. They met to discuss who would play the role of John, the young drifter who is mentored by Sydney. Ironically, Lyons had a very short list with John C. Reilly's name at the top, someone Anderson had separately been considering.

"John is incredibly funny, but he is also very honest and real," says Anderson. "He's also one of those rare actors who can actually project several different layers of his character at the same time." Reilly read the script and agreed to attend.

The Directors Lab gave all the principals a tremendous opportunity to develop the material. For Anderson, the lab really helped him to "concrete" the story-telling elements. "They take on a lot of small and weird projects and then work closely with the filmmakers to make sure they understand the basics and the devices of good story telling." He was fortunate to have the input of some really talented professionals on Hard Eight, including Michael Caton Jones and Frank Oz in the directors section and Richard LaGravenese in the writers section.

"The actors had a rare chance to experiment with the characters and to improvise their roles, which gave them a real head start," says Anderson. "Usually actors are lucky if they get two months of rehearsal time prior to shooting a film, but it took us two years to raise the money and they stayed with it."

When the time came to shoot the movie, Anderson and Lyons sat down to cast the remaining roles. Anderson was a huge fan of Gwyneth Paltrow, whom he thought was terrific in Shout and Flesh and Bone, so he was thrilled when she accepted the role.

"Gwyneth is a great actor," says Anderson. "Clementine is stupid and many actors have a hard time dealing with that, they try to wink at the camera - to somehow make it funny, so we will know they aren't really stupid. It's not in Gwyneth's character to do that. She never condescended to her character for a moment."

Another great addition to the cast was Academy Award-nominated actor Samuel L. Jackson as Jimmy. Anderson wanted Jackson for the role because he knew he would create the "classic bad guy, who would also throw in enough idiosyncratic touches to confuse things." Rounding out the cast was Philip Seymour Hoffman, a New York based actor who appears in a cameo as a young gambler who taunts Sydney at the crap table.

In January of 1995, Anderson headed to Reno to shoot Hard Eight on the location he had chosen when he wrote the screenplay. "I like Reno," says Anderson, "unlike Las Vegas, which is always so hot, Reno has a winter and the feeling of a real city - it's like an Old West town. I think shooting Hard Eight in Reno enabled me to capture a state of mind that I wanted for this film."

Another advantage of shooting the film there was the pool of locals that were featured as extras in the film. "We had an amazing mix of real extras and people just wandering into the shot, which gives the film a nice texture," says Anderson. "For instance, we used real cashiers in the opening sequence so they move money like real cashiers move it. This kind of real function is hard to get from an extra and I think it makes our film more authentic."

Music was another important element for Anderson. He had listened extensively to noted singer/songwriter Michael Penn's second album, Free For All, while writing the screenplay. "The album's lyrics and musical texture fit the mood for the movie," he says. "While they are traditional rock 'n' roll songs, there was something within them that said he could do a movie score - the songs were incredibly cinematic."

So Anderson asked Penn, who is a friend, to compose the score for Hard Eight. Penn agreed and asked performer and producer Jon Brion to collaborate with him on it. For the end title song, "Christmastime," they asked Aimee Mann to record it with Penn. A former band member of 'Til Tuesday, Mann's current solo album is entitled I'm With Stupid.


Paul had previously worked with Philip Baker Hall on his short film Cigarettes and Coffee.

Financing for Hard Eight took 2 years to secure & getting his final cut released was a complete nightmare for Paul. This is well chronicled on the Special Edition DVD.

When Pulp Fiction hit it big, the fact that Samuel L Jackson was attached to the project ultimately helped secure the financing.

Originally Sydney's execution of Jimmy had a page of dialogue. Here's Paul comments on this:
"There was a bunch of stuff written like 'Gimme my money,' and 'Fuck you,' but then I realized that was a major mistake. Sydney's here to kill this guy. He's not gonna talk. He's gonna shoot him in the face over and over again. The money's not first. Killing Jimmy is."

Michael Penn on how he & PTA first connected. Courtesy of CNN
"He was … listening to my album 'Free For All' when he was writing what became 'Hard Eight.' He was determined to have me score the movie. He was contacting my manager for the better part of a year to try to get me to be involved and I kept ignoring him because I didn't want to score movies. … I finally said all right, just to shut him up. And I went down and saw a screening of 'Sydney' and thought it was phenomenal. And as it turned out, it was a wonderful experience. It wasn't art by committee. It was Paul. And that led to 'Boogie Nights.'"

Cinemania Online - Jim Emerson
"P.T. Anderson's debut, though entirely different in style and tone from "Boogie Nights," is every bit as impressive. Another tale of (surrogate) fathers and sons, love and redemption, offering elusive glimpses into the unfathomable mysteries of the human heart."

Cinemania Online - Kathleen Murphy
"The debut that promised "Boogie Nights," the dark, moving story of a failed father condemned to seek out and save lost sons."

Creative Loafing - Matt Brunson
"Before he exploded with Boogie Nights, Anderson made his debut as writer- director with this undiscovered gem about the friendship that develops between a veteran gambler (Philip Baker Hall) and the naive young man (John C. Reilly) he takes under his wing. All of the acting is exemplary (including Gwyneth Paltrow as a none-too- bright waitress/prostitute), but it's Hall who delivers the performance of the year as the seasoned casino dweller, a benevolent, sophisticated gentleman who knows how to handle just about any situation that comes his way."

MovieMaker Magazine - Rustin Thompson
"In just two films, Paul Thomas Anderson has established himself as a director of vision. It's clear with Hard Eight and Boogie Nights that he is concerned with survival, the people who practice it and the tools they use and with the paternal instinct, the ways older men can sweep the young under a fatherly wing. With Boogie Nights it's Burt Reynolds' soft-hearted porn king; here it's Phillip Baker Hall's aging gambler. He is a man who survives through patience, by waiting for the right roll, by working a system just enough. It is a testament to Anderson's trust in his own story that he delivers his climaxes quietly. This is the best American debut film in years. It's dynamite with a slow fuse."

Now Magazine - John Harkness
"Paul Thomas Anderson, is the debut from the director of the over praised Boogie Nights, delayed a couple of years since its Cannes premiere. If casting is 90 per cent of direction, Anderson has a touch of genius and a lot of luck in getting stage actor Philip Baker Hall to play Sydney, an old wise guy who seeks redemption by helping a down-and-out younger man (John C. Reilly) for reasons the younger man can never know.

The film's star power comes from the supporting players -- Gwyneth Paltrow as a cocktail waitress/hooker who is both stupid and obstinate, and Samuel L. Jackson as an aspiring wise guy who doesn't know as many angles as he thinks he does."

Temple University Column - Ben Trout
"We all missed it in the theater, but rent this gem, possibly the best directorial debut in years. A film that centers around Sidney, a gambler who takes John, a vagrant, under his wing. The strong sense of storytelling and deep respect for character development is evident in P.T. Anderson's brilliant study of human nature."

'97 in review: The good, the bad and the dubious
"Oscar-worthy performances that won't be nominated because no one saw the movies: Philip Baker Hall as the enigmatic Reno gambler whose mysterious philanthropy drives the plot of "Hard Eight"."