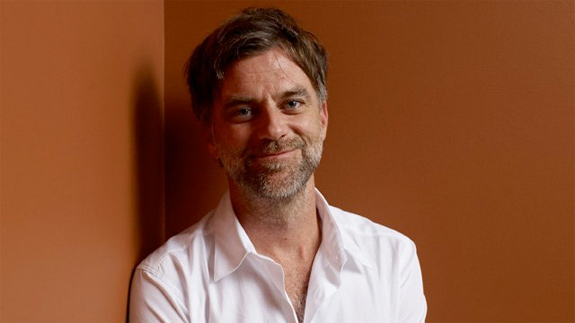 As The Master hits local cinemas, its maker opens up about his ongoing fascination for stories about male dynamics.

A filmmaker whose output is ambitious and challenging in both subject matter (Hard Eight; Boogie Nights; There Will be Blood) and style (Magnolia; Punch Drunk Love), Paul Thomas Anderson has been answering questions about his complex Scientology-themed drama The Master, since it premiered at the Venice Film Festival in September. A few hours before its first Australian screening as the opening night film at the Cockatoo Island Film Festival, a contemplative (and severely jetlagged) Anderson sat with SBS Film.


The male relationships in your movies are most often very patriarchal in nature. John and Sydney in Hard Eight; Dirk and Jack in Boogie Nights; Frank and Earl in Magnolia; Daniel and Eli in There Will be Blood; a particularly complex hierarchal male relationship is explored in The Master. What fascinates you about the young/old male relationship?

You’re convinced when you are making these things that they are all brand new and not at all like something that you’ve done before and then they turn out with these patterns and similarities. I don’t hunger after them and I don’t actually spend that much time thinking about them, but... I keep using the word ‘gravity’ and that’s really all it is. You have to get into a kind of auto-hypnosis when you write, for me at least, and if that’s where it goes then that’s where it goes. Yeah, I keep coming back to it so it’s got to be interesting and dramatic somehow. It seems to be fertile ground. I was talking to someone earlier and they were all like “Freudian this and that” and shit like that and, man, if my father was around he’d look at these films and go “What the hell’s going on?” (laughs). We had a fantastic relationship, not dark or complicated, so...I don’t really know.

He was naval man, your father. Is this film as personal a film as you have made? Is The Master you looking back and interpreting his life?

Yeah, kind of, but not really. There are a lot of similarities but also so many diversions. My dad is certainly not Freddie, not even close. For me, if you can sort of hold hands to the past, [connect] with a certain era that you didn’t grow up in, or hold hands to an era that he grew up in, then yeah, I can get to understand him better. Just learning and having to deal with details of that time helps you understand, helps you kind of time travel and think about what he must have gone through.

Was Joaquin Phoenix’s version of Freddie Quells the one you envisioned when you wrote the script?

I don’t even remember what I envisioned when I first wrote Freddie, but I’m pretty sure that what he did was never, in my wildest dreams, anything like what I would have seen in Freddie (laughs). That’s great, though, that’s exactly how it should be. To have a performance that is so good and unique that it makes you forget whatever your original preconceptions were about a character. He just created this full-bodied character that was incredible.

The characters of Lancaster and Freddie are so intrinsically opposite and both so deeply flawed, together they seem to represent the struggle of one whole but messed-up man.

So many elements of the script were so elusive and the two characters were just not the kinds of people who are meant to get together in a film. For much of the writing, it was so confusing to me the way Freddie and Lancaster interact, but that was ok for me. It somehow made it more honest and real, like a real relationship. It is something that is complicated. What would happen if a man like this met a man like this? There is a sort of inevitable dead-end to it, which is exciting. It is not going to end in a happy way.

Why was it so crucial to set it in the 1950s? What does the America of that period contribute to the story?

Post-war America [onscreen] has a good vibe, a strong sense of time and place. When I was first writing the story I was stealing stuff from John Steinbeck’s life, when he was just drifting around California and writing about all that Prohibition-era stuff, which was the late ‘20s and ‘30s. So, when the story was just about Freddie, it didn’t matter what era it was. The story of a sailor drifting around has been around for hundreds of years. It changed when Phil’s character came into it and it was a loose adaptation of L. Ron Hubbard; that kind of dictated the era. Now there was a link there that kind of made sense. It’s always lucky when pieces start to fit together when you’re writing that kind of form themselves into a story.

From your first film with Philip Seymour Hoffman, when he was that obnoxious jerk in Hard Eight, you’ve shared an incredible career path with the man.

God, it’s so funny to think about [that scene]! I haven’t thought about that in a long time. We had talked on the telephone but I had never met Phil in person until the day he came to shoot that scene. That makes me so nostalgic, to think that that was 15, 16 years ago when we shot that and now here we are. I never, ever thought that I would find an actor that looked and sounded like him and that we would collaborate for this length of time. It’s weird, isn’t it?

There was a cinematic vibrancy about your early works – the pool party sequence in Boogie Nights; the interaction of song and image in Magnolia. That began to change with There Will Be Blood, and now The Master evokes a quietness that is equally compelling but stylistically very different from your early works. Did the material demand that approach or does that reflect your growth as a director?

Probably both. They probably go hand-in-hand. I guess I’m less interested in imposing myself upon the story and on this story, in particular. I would find it hard to justify that sort of momentum and energy in this story. I mean, what would you do? I don’t even know what you would do. So much of it is just people talking in a room, chamber-drama kind of stuff, that the way to do it was just to keep it simple and get out of the way. That said, I was always so excited when there was a day when I could up the tempo a bit (laughs), do something a little bit flashy. Those days were always exciting. It just comes down to the story. There Will Be Blood was a concrete attack on an old-fashioned style and it fitted that character so well. Chiselled and straight forward, real meat and potatoes stuff, and it was easy to do that and to discipline yourself to do that kind of thing. Just to stay out of the way, John Ford-style or John Huston. Those are the films that I love and grew up on, so it was nice to inhabit that world a little bit.