Barry Egan is a small business owner with seven sisters whose abuse has kept him alone and unable to fall in love. When a harmonium and a mysterious woman enter his life, his romantic journey begins. 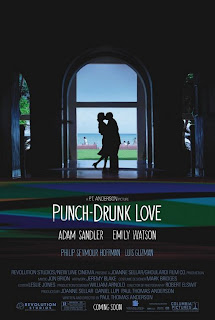 The genesis of Punch-Drunk Love came two years ago in a Time magazine article about David Phillips, a University of California civil engineer who stumbled upon a lucrative frequent-flyer promotion. Now known to the entire airline industry as the Pudding Guy, Phillips had accumulated 1.25 million miles by purchasing 12,150 cups of Healthy Choice pudding for a mere $3000.

So intrigued by the story was writer/director Paul Thomas Anderson that he asked to meet with Phillips, an encounter that provided initial inspiration for the character of Barry Egan. After optioning the rights to Phillips’ story, Anderson began drafting a straightforward, if offbeat, romantic comedy. "After Magnolia, which was a huge, dark, challenging movie, I think Paul wanted to make something that was contained, uplifting and sweet," says JoAnne Sellar, who, beginning with Boogie Nights, has produced Anderson’s last three films.

As it happens, Anderson already had someone in mind to play Barry. "Paul came to me one day and said ‘I’m writing this for Adam Sandler.’ He’s been a huge fan of Adam’s for quite some time and wanted to create something specifically for him." It was the same approach that Anderson would take to the character of Lena, whom he created for British actress Emily Watson.

Fortuitously, Watson was eager for a change of pace following her intensely dramatic roles in Angela’s Ashes and Hilary and Jackie. "Paul took me to Art’s Deli and told me that he was writing something for Adam Sandler. He asked me what I wanted to do next and I said, ‘I don’t want to do anything more like cry or die.’ We had a great afternoon, just chatting away; of course I didn’t know at this stage that he’d already written me a part."

Once she’d finally read the script, Watson was fascinated by the prospect of playing a character with so little history. "I’m so used to having a wasting disease or a special talent, something that I can really get my head into and work on. Paul said to me, ‘If you find yourself working on this in any way that you’ve done before, throw it out the window.’ He wanted it to be something completely fresh for me as an actor."

According to Sellar, this "never been there, never done that" philosophy shaped the entire production. "The challenge was to create something different by taking a more intuitive, uncharted approach than on our previous films. What Paul said to us, essentially, was, ‘I’m not sure where we’ll begin, but let’s not begin here, in this familiar place." Which meant that we all – Paul, the actors, the crew – were trying to relearn our jobs in some fundamental way."

Sandler and Watson were soon joined by Philip Seymour Hoffman, Luis Guzman and Mary Lynn Rajskub, after which Anderson came to casting director Cassandra Kulukundis with a novel idea for filling out the remaining roles. "The idea was to emphasize the unique place that Adam and Emily’s characters occupy in the film by surrounding them with non-actors," she says. "This was especially important in the case of Barry’s sisters. Paul didn’t want to hire actors because he wanted to capture the raw awkwardness of family, where people nag and talk over each other and don’t wait for their cues."

By "harassing people on the street," taking phone numbers and generating word-of-mouth, Kulukundis was able to amass an eclectic group of non-actors for the cast, including a restaurant manager and several emergency room nurses. Best of all, she found an actual family to portray Barry’s. "I went to meet with these two sisters and in talking discovered that they had two cousins. So of the seven sisters in the film, six are non-actors and four are related. It was kind of crazy, especially given that we asked some of the women to bring their husbands along, but they all gelled perfectly. They had no fear."

In the course of scouring Utah and Los Angeles for two non-actors to play Barry’s dogged pursuers, Kulukundis happened upon yet another family that would alter the film’s complexion. "I met with this guy from Utah who was in L.A. doing construction, and he mentioned that he had brothers, all of whom are blonde and Mormon." The script was re-written to accommodate the four brothers pursuing the man with seven sisters.

To give his creative team a visual starting point before the onset of production, Anderson screened a mixed bag of films, ranging from Ernie Kovacs’ short films to Help! to Astaire & Rogers’ Carefree. "We watched a whole gamut and took a little bit of inspiration from each," says costume designer Mark Bridges. "It was all shaken together and then used by Paul very discriminately."

Bridges took his cues from 1940s-era MGM musicals when creating the wardrobe for the main characters, most notably in regard to Barry’s blue suit. "Designing with blues is not something you usually do because they’re so sensitive on film. But it worked very well for us because Paul was really interested in replicating the feeling of Technicolor. If you look at On the Town or An American in Paris, they weren’t afraid to use color then."

A similar approach to color was used for Lena’s clothing, though her look was softened with simple skirts and cashmere sweater sets. Explains Bridges, "I like the idea of dressing the romantic leads in a matching style. Here it reinforces what’s obvious to everyone but Barry and Lena: that they belong together."

Punch-Drunk Love was filmed entirely on location in the San Fernando Valley, Utah and Oahu. Among the wide range of sites used were a cavernous San Fernando warehouse that was transformed into Barry’s place of business, a Northridge residence that served as one of the sister’s homes and a Pomona mattress store that doubled for the Utah-based center of operation for Philip Hoffman’s character. Comments production designer William Arnold, "Paul latches on to certain places and sees a truthfulness in allowing them to be what they just plain are. So we didn’t change much in any of the locations except the house in Northridge, where we had to knock out a couple of walls to accommodate the camera angles. Luckily we were able to find people who were willing to play ball with us."

For Barry and Lena’s apartments, the production team searched the Valley for two of the more nondescript places they could find. "Both apartments are generic, but for different reasons," explains Arnold. "Because it’s not really clear where she comes from, we didn’t want to leave any clues about Lena’s history. Whereas Barry’s place is reflective of the blandness in his life, so there is no passion showing on his walls or in his furniture."

The Oahu locations gave the design team an opportunity to fully embrace the film’s Technicolor influences. Says Arnold, "Paul wanted Hawaii to be the antithesis of minimalism, so we were looking for gorgeous sunsets and flowers, anything that would make it a romantic escape for Barry and Lena. We managed to find a great hotel that required virtually no dressing, in a beautiful spot, with beautiful furniture."

As with all of Anderson’s films, music plays a vital role in the aesthetic tone of PUNCH-DRUNK LOVE. "Paul makes movies with the music already fixed in his head – it’s a huge, integral part of his work," says Sellar. So integral to this project, in fact, that Anderson asked friend and frequent collaborator Jon Brion (Magnolia) to create a temporary score to be played on set during production. Explains the composer, "Paul suggested different tempos, then my engineer and I recorded a series of 10-minute ensemble percussion pieces that the actors listened to between takes to give them an idea of the scene’s rhythm." The temporary tracks were created using different drums, rare instruments and treated piano, a process developed by John Cage in which an object, such as a screw, is placed on or around a string to alter the vibration, duration and tonality.

Ultimately the percussive elements, as well as some extra overdubs, were shortened and edited to film, an approach that all but erased the line between scoring and sound design. Explains Brion, "I would give Paul and [editor] Leslie Jones piles of very short, 3-5 second pieces that, while related to the DNA of the score, were essentially sound bites which they could place at their discretion. So it was a very organic process involving a lot of people."

Punch-Drunk Love is rated R for strong language including a scene of sexual dialogue.

The following year, Anderson formed the Ghoulardi Film Company with producer JoAnne Sellar, through which he produced his second film, New Line’s Boogie Nights, which opened to great critical acclaim in 1998 and went on to garner three Academy Award nominations. He returned in late 1999 with Magnolia, winner of the prestigious Golden Bear at the Berlin International Film Festival. It also received three Academy Award nominations, including Best Original Screenplay, garnered Tom Cruise a Golden Globe for Best Supporting Actor, and was named Best Film of the Year by FIPRESCI, an eminent association of international press. In addition, Aimee Mann’s soundtrack received three Grammy nominations and an Oscar® nomination for Best Song.


A lot of interest surrounded PTA's choice to have Leslie Jones edit the film (after successful previous collaborations with Dylan Tichenor). Paul was ready to collaborate with someone new & met Leslie through a mutual friend. They hit it off wonderfully & had a great time working on the picture together. Leslie previously edited Roman Coppola's CQ & Terence Malick's The Thin Red Line. Her father is also an editor (Robert C. Jones). Among his film credits: Shampoo, The Last Details, Guess Who's Coming to Dinner? Future collaborations with Dylan are still a possibility.

Many of commented that this painting by Andreas Gursky, may have been an inspiration for the a similar shot in the .99 store.

Look real closely at Barry's knuckles after he punches the wall. They spell out "L O V E".

Both Fiona Apple (FA) & the late director Ted Demme (TD) after given special thanks in the film credits.

This is what the producer, Joanne Sellar, had to say about Punch-Drunk Love: "After Magnolia, which was a huge, dark, challenging movie. I think Paul wanted to make something that was contained, uplifting and sweet."

Paul was awarded the best director prize at the Cannes Film Festival in May, 2002.