‘The Master’ Premieres At A Secret Screening In LA; Reactions Rolling In 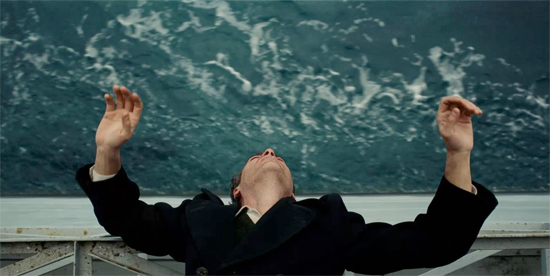 So, it looks like we're not going to be able to sleep for the next month if we're going to get through this because shortly after signing off last night we got word that Paul had brought along a little surprise last night for the moviegoers at the Aero Theatre in Santa Monica. In Contention was first to report that before a 7:30pm screening of "The Shining," theatre staff announced there would be a "secret screening" afterwards and anyone who wanted to stay was welcome. Afterwards guests were treated to the first public screening anywhere in the world of "The Master," projected, yes, in 70mm. Paul and Maya were in attendance for the film which reportedly plays roughly 2 hours and 10 minutes long.

The Playlist rounded up some initial reactions most of which were very, very positive:

@michaelwhittle  "Possibly the best film watching experience I've ever had. PTA's best. Not a doubt in my mind. #THEMASTER70MM"

@TotallySketch (Michael Gallagher) "Just saw 'The Master'. A movie has never made me feel quite like this one did. I can't describe it or even rate it. I am speechless."

@aaldere1 (Andrew P Alderete, "The Social Network" producer Dana Brunetti's assistant) "The Master was amazing. Oscars all over this one."

@LoganDoe  "@prfessorbigsock Hoffman is one of the finest actors alive. The Master is (more) proof. #themaster"

@pillowfightin "@cigsandredvines Saw The Master in 70mm at the Aero Santa Monica. Surprise screening after The Shining. Its like nothing yvever seen before."

@Super_Matts "THE MASTER is...interesting...I'll be thinking about it for days #THEMASTER70MM J Phoenix and P S Hoffman are out of this world"

And the most extensive reaction so far comes from 16-year-old cinephile Victor Escobar: his tweets after the film can be found below.

"Don't want to say more than a few words about it but it is an all around excellent film. I've yet to see one bad PSH performance but this one may be his best. 2hrs 10 min. Will get nods for Picture. Good chance of winning original screenplay and acting awards. If it were me, I'd put them both in the Best Actor category but if one them is getting the supporting nod, its Hoffman. It will have its fair share of detractors and its not a "safe" choice. If you guys can, see The Master in 70 mm. Looked gorgeous and its the way P.T Anderson wants you to see it. "

Hollywood Elsewhere, who noted that we "dropped the ball" on this one (thanks Jeff!) received a more lengthy reaction from a reader called "Bobfilm."


"I'm still digesting everything I saw, but it was pretty amazing. It was like a strange fever dream. [But] not audience friendly AT ALL. There are three or four scenes between Phoenix and Hoffman that are barn burners. It also containts the best work Amy Adams has ever done. The style feels like Terrence Malick by way of There Will Be Blood. Wish you could have been there!"

Read the rest (minor-spoilers, depending on your threshold for that kind of thing) over at his site.


The performances are perfect, the pace incredible, the music generally fitting, the film is an abstract dreamy essay. It is sort of there more to question than answer. It's a kinda exercise in just picking the audiences brain. Sadly a lot of the audience were complete morons, laughin at completely non funny things. The film has a great humor to it though, a brotherly joviality. It lacks the 'punch' I was expecting, but I'm more realizing this film may be perfect. I didn't really care for "Boogie Nights" first view, but now it's my favorite movie.

Oscars, I don't know really, we still have a lot of great movies coming out that will definitely be more audience friendly. This won't be seen in red America but they need this more than I do.

Yes I bowed to PTA as he entered and then shook his hand and thanked him and followed him to the projection room where he screened the first of many to come of the master. It seems it'll be one that requires lots of em

Much like "There Will Be Blood," "The Master" is a distilled and intense character study that focuses on the founder of a new religious organization and his relationship with Freddie Quell - Joaquin Phoenix's character.  Without giving too much away, I left with an intense sense of pause and reflection - just as one does after watching an observational documentary filled with gorgeous photography accompanied by distinct score.  You are taken on a journey, and with that journey comes the essence of human emotion and a distinct look at what freedom means in post-WW II America.  Johnny Greenwood's score is fantastic, and much like "There Will Be Blood," enhances the emotional connectivity between each scene and the characters you adhere to.  It is clear that Greenwood is similar to John Zorn's relationship with film - especially films like "Workingman's Death" where the music is almost a character in itself.  Seeing it after a Kubrick film was fitting, in that they were definitely of the same caliber.  Watching it on 70mm was the ultimate treat as it paid tribute to the incredible cinematography and fantastic performances by Joaquin Phoenix and Philip S. Hoffman.  I truly believe that their performances will not be matched come Oscar time.


"We're all children of Kubrick, aren't we? Is there anything you can do that he hasn't done? It's so hard to do anything that doesn't owe some kind of debt to what Stanley Kubrick did with music in movies. Inevitably, you're going to end up doing something that he's probably already done before. It always seem like we're falling behind whatever he came up with. "Singin' in the Rain" in "A Clockwork Orange" - that was the first time I became so aware of music in movies. So no matter how hard you try to do something new, you're always following behind." –Paul Thomas Anderson

"Coke and popcorn under a 70mm print. It escapes the idleness of most movies with a strong tenderness, exceeding the dull word "melodic". The Master is as refreshing as being obliterated by an avalanche." –my review on mubi.com under the name Salaway Gennaro

Packed theatre for The Shining. I over hear a guy say to his date behind me, "Everyone who is here right now, for this movie, is cool in my book". The connoisseurship that the Aero would lure for The Shining is exactly what Paul Thomas Anderson wanted. The master of ceremonies introduced The Shining in it's new digital restoration and uncompressed sound. "But nothing beats the real thing. Tonight after The Shining, we are showing you a surprise screening of a 70mm film"(I knew what it was right then). After The Shining he announced that we would be the first audience to see Paul Thomas Anderson's newest film. Later I heard a girl say to him he was like Santa Clause. In the line for the men's room which trailed up a stair case that also lead to the projection room, I heard a kid say on his way down, "Paul Thomas Anderson is up there!!" But I never saw him and there was no Q&A afterwards.

But to get to the point, The Master was fucking great. But you could feel in the theatre that many people (old farts) had a certain distance from the film. Scorsese once observed that every time a new Kubrick film came out, people didn't react well to it but then 10 years go by and people realize that nothing like it had ever been done before and it's aggressively admired. Joaquin Phoenix's performance is a home run and I don't give a fuck about the Oscars. But his character, as Lancaster Dodd defines him, is a "scoundrel!". "I think it is essential if a man is good to know where he is bad and to show it, or if he is strong, to decide what the moments are in the story where he is weak and show it. And I think that you must never try to explain how he got that way he is or why he did what he did"–Kubrick. Anderson's story doesn't empathize over Freddie, Hoffman's imploding acting does however reach for him gallantly – [slight spoiler dialogue removed] Freddie is haunted and seems to belong nowhere. The Master will unforgivably be compared to Kubrick movies but the magic sincerity in the acting is more like a Pialat film, bursting across the screen.

Jonny Greenwood again gives Paul Thomas Anderson a feast of music yet Anderson reuses "Popcorn Superhet Receiver Part 3". It's wonderful that The Master was screened after The Shinning which is driven by Ligeti and Penderecki.

The Master was the brightest movie I've ever seen. Anderson has said that film is a hypnotic experience of light flickering through 24 frames a second. I hope you get to see it in 70mm.

Anne Thompson has posted the first full-length review of the film from someone who was at the screening last night but there are a few more spoilers lurking over there. Proceed at your own risk. The headline reads, "'The Master' Is Visually Dazzling in 70mm, Enigmatic, Certain to Polarize" and we wouldn't have it any other way.

@Super_Matts also wrote us with his some more thoughts on the film:


I still find it hard to put my thoughts of Paul Thomas Anderson's THE MASTER into words.  I left the theater not really knowing how I felt about it.  I feel that same way now.  Not a negative thought in my mind, just lots of thinking.  It's the same exact way I felt after leaving THERE WILL BE BLOOD, which I consider to be the most important film of the last decade.  I thought about that film many days after I left it, admiring the picture more and more with each passing moment.  I'll bet anything it will be the same way with THE MASTER.  The film is a journey, perhaps the most personal journey I think PTA has ever taken me on.  It's a fascinating film that is very well crafted with beautiful cinematography and extraordinary acting.  I knew from the opening shot, so simple yet so grand, that this film was going to be something else.

I will not go too deep into Phoenix and Hoffman's talent as I'm sure everyone will be talking about their performances in depth, but in short, they were both electrifying, giants on the screen, that had this unbreakable source of chemistry between one another.  Honestly, every time the two actors shared the screen with one another, I couldn't help but be reminded of Brando and Malden's work together, in which you are unable to tear your eyes away from the screen and are bound to experience the emotions and events they are going through.

It's a fascinating film.  It's a journey that I think each and every viewer will take away something different from.  If there is one thing I know for sure, it's that Paul Thomas Anderson does not disappoint on his latest venture and that he definitely made it worth the wait.  I can't wait to see it again.

Like all of you right now, we really wish we could have been there. If any readers were in attendance and want to send us some completely spoiler-free impressions, you know where to find us. In the meantime, we're still trying to rally the troops for our #THEMASTER70MM campaign, so do lend a hand, won't you?

Stay tuned to Twitter and Facebook if you don't mind being the last ones to know about these kinds of things.