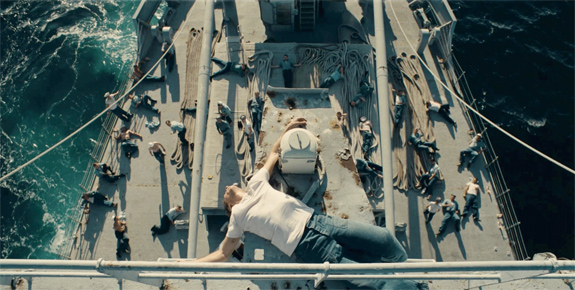 Update 8/27: Mike Maggiore, programmer and publicist for the Film Forum reached out recently to us to say that no screening took place at the Film Forum, so it appears our source may have been confused... The screening at MoMI definitely took place since it was confirmed through multiple sources including Paul's assistant.

Updated 8/20: It appears that these may have been friends & industry screenings not meant for the public to stumble onto like the LA screening a few weeks ago. Not that a few lucky attendees didn't do just that.

Yes, 3 days after my Chicago adventure, "The Master" arrived in my backyard for not one but two secret screenings last night. The film played at the Film Forum to around 100 people reportedly in 70mm around 8pm and again at the Museum of the Moving Image in Queens sometime after that. Paul was spotted in attendance for both screenings though it doesn't appear he did any sort of introduction or post-show Q&A. He introduced the film by saying "roll it." (Thanks @GusCruz) As with the surprise at the Aero these were completely unannounced, under-the-radar screenings, so almost nobody knew about them beforehand (which is just the way Paul wanted it). That sound you hear right now is an entire city of cinephiles kicking themselves for not going to check out "Taxi Driver" at MoMI last night. Paul seems to be having a ball showing up with his little surprise all over the country so keep your fingers crossed and your eyes peeled. There could be more to come...