Expect The Unexpected; ‘The Master' Screens In Chicago 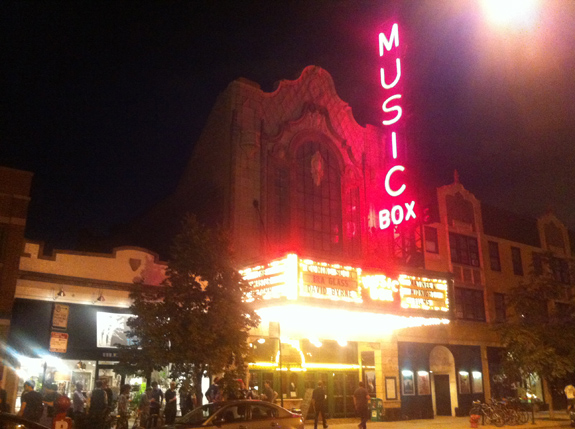 As you're probably well aware by now, "The Master" had its second public screening at the Music Box Theatre in Chicago on Thursday night. The screening had come about due to an article posted over at Time Out Chicago which pointed out the venue as an ideal place to show the film in 70mm, which prompted our own campaign to find more 70mm screens that would be able to show the film. Like the LA screening, this one too was something of a surprise for audiences, but unlike the first screening, fans had a 24 hour heads up.

We here at Cigs & Vines may have gotten word of this surprise a day or so earlier but it didn't look like CJ or myself would be able to make it to Chicago on such short notice. However fate smiled on me that day and fortuitous circumstances led me to book a last minute flight from NYC to the Windy City for a whirlwind 12 hour trip. Some of you may have followed along on Twitter with my manic "Planes, Trains & Automobiles"-style adventure just getting to the venue on time and if so, thank you for your help and encouragement. (Ironically the film would end up playing in my own city about 3 days later but I still wouldn't trade the experience for anything.)

Though he didn't introduce the film or come out for a Q&A or anything afterwards, Paul was indeed there for the screening, which began a few minutes after its scheduled 10pm start time. We were told via an introduction by Music Box general manager Dave Jennings that the film did not have end credits (which we suppose still qualifies this as "incomplete" so it can technically 'Premiere' at Venice and TIFF) but rest assured, what we were shown was the final cut. Because I don't want to spoil the film for you guys until you've had a chance to see it, this will not be a review but rather some brief impressions.

Watching "The Master" was like seeing a dream come to life. Images, character names and various snippets of info that had trickled so slowly out of production over these last 2 1/2 years at last coming to life. The mansion. The detective. The frame. The 70mm. The puzzle finally assembled. And despite following the film as closely as we have -- personally, I'd done everything but read the script -- the puzzle still looked nothing like I'd imagined. Many have asked which of Paul's films does this most closely resemble and the answer is: none of them. In fact, it's really not like any film I've ever seen. While there are recurring themes and certain hallmarks found in PTA's previous work, the overall piece is something completely new.

Of course, I loved the film. "The Master" is a strange, hypnotic and bold new chapter in the career of Paul Thomas Anderson. It's his loosest and least narrative work to date featuring a series of big scenes in succession, some of which are the very best Mr. Anderson has ever put to film. Joaquin Phoenix plays Freddie like an untamed animal. I've never seen anything quite like it. Hoffman is charismatic and unpredictable as The Master and their scenes together are utterly magnetic. The 70mm cinematography by Mihai Malaimare Jr. is sharp, vivid and breathtakingly beautiful. Jonny Greenwood's score is unsettling and elegiac. The scenes I recognized unfolded in a way I couldn't predict while several of the trailers' iconic moments were absent altogether.

I may not quite know what I've seen yet but I know that it will take me some time to properly digest it. So while certain parties may be quick to instantly categorize the film, the conversation around "The Master" will last much longer than any awards season chatter. What makes Paul the most exciting director of his generation is that he's constantly evolving as a storyteller and absolutely refuses to repeat himself. As I said after the screening, "no matter what you expect, it's not what you're expecting." I can't wait for you guys to see it.

If you're looking for more, Criticwire has a pretty good rundown of the Twitter reactions to the film and if you want a tantalizing but non-spoilerful way to get a taste of the film, that might be the way to go. This one is probably my personal favorite. As far as lengthier examinations, there are full reviews up at The Playlist, The Film Stage, Time Out Chicago, Movieline and several other blogs but beware of spoilers. Not that this is the sort of film that can be easily ruined by giving away some major twist (there aren't any that come to mind), each gives away just a little bit more than you might have known otherwise and are probably best left until after you've seen it.