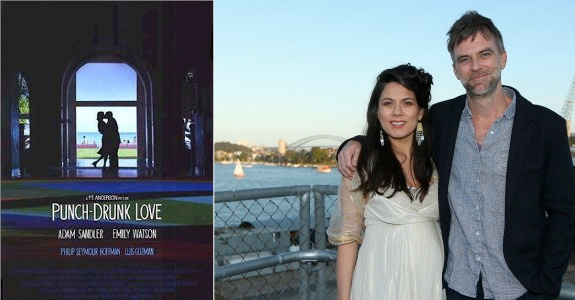 This week cinephiles down under have been treated to their very first screenings of "The Master" as the film just had its Australian premiere at the Cockatoo Island Film Festival and another screening in 70mm at the Astor Theatre in Melbourne. Paul was on hand for both events (you can see him above with the artistic director for the Cockatoo Film Fest) and participated in a post-film Q&A at the Astor. A reader who was on hand at the latter event sent along a few notes.
The Astor Theatre was recording the Q&A so lets hope it goes online soon. (thanks Mert!) If any of our readers were recording and would like to send it along, that would be great.

We also came across a great quote from Jonny Greenwood in the latest issue of Uncut where he talks about his collaboration with Paul.

Matt Bellamy [of Muse]: How did you get into writing soundtracks, and how does it differ from writing pop songs? As you can guess, I'm jealous of your new calling...

Jonny Greenwood: It's just a different way of collaborating with people - like being in a band with a director, and a bunch of images and stories - instead of drummers and bass players. It's fun! Don't be jealous. Plus, you and I would only ever get to see the most pampered side of the job. Composers who do it properly all the time aren't treated too well - on many films they're ranked way below, say, make-up, in order of importance, and not given much freedom to try things out. I was just offered a film because they had to 'let go' of their current composer and I think that happens a lot - in fact, I probably came close during the scoring for The Master. I kept adding jazz flute. Paul kept sending me pictures of Ron Burgundy.

At the moment we're struggling to think of something more amusing than PTA sending Jonny Greenwood pictures of Ron Burgundy in response to his compositions but it's not happening.

One day left to enter our Gone To China Contest to win a copy of the soundtrack & a poster!