EXCLUSIVE: PTA Talks The Challenges Of Adapting ‘Inherent Vice'; Has Cast In Mind 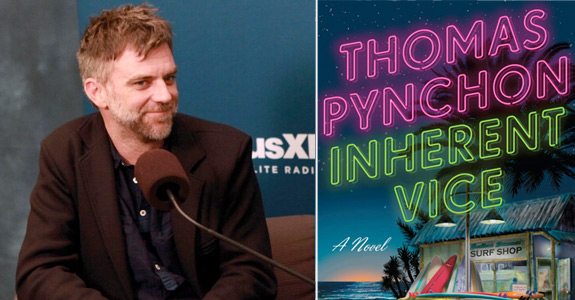 This morning on a NYC press tour that included stops at The Daily Show, CBS This Morning (with Charlie Rose!) and a surprise Q&A with Jonathan Demme, PTA stopped by the Sirius XM studios to record an hour-long chat called "Paul Thomas Anderson Town Hall." The show was hosted by Rotten Tomatoes and offered a dozen lucky fans the chance to ask questions of their choosing. One half of the C&RV team was on hand to witness the conversation which covered off on a variety of topics and was admittedly pretty damn great. Paul spoke about his favorite filmmaker working today (Apichatpong Weerasethakul), which actors he'd love to work with (Robert DeNiro (still), Jim Carrey, Jennifer Jason Leigh, Charlize Theron, Michael Shannon) and what recent films have impressed him ("Beasts of the Southern Wild"). He also spoke about his next project, an adaptation of Thomas Pynchon's "Inherent Vice" which has been brewing since back in 2010.

When asked about the struggles of adapting the book he said...


"The hardest thing is just trying to find how to take 400 great pages and turn it into ideally 110, maybe 120 script pages. And it's just difficult to do. There's no shortage of great things on every paragraph and every page. So, it's a very uptown problem to have. It's not like, 'Oh God, what am I going to do with this turd?' It's just not that at all. It's like somebody dumped bags of gold in front of me and I can only take so much with me. What do I do?"

On why wanted to adapt Pynchon...


"I've always loved his work, his books are just dynamite to me. [He] was always a big influence, [his books are] filled with so much humor and so much craziness and thoughtfulness. Somewhere between fart jokes and kinky sex and just such humanity and delicateness. That was just stuff that I gobbled up, his books. So this is one that, I dunno, we'll try. We'll see."

And if he's adapting the film with any actors in mind...


"Yeah but I can't quite put my finger on it and I wouldn't want to name names out loud or anything to jinx it or something like that. But they're such well-drawn characters it's going to be really fun to go and try to do that. Hopefully soon."

You can listen to the entire thing OnDemand if you're a Sirius subscriber and if you're not you can sign up for a free trial at their site. We're gonna try to get a transcription up soon so reach out if you'd like to help out with that. Have a good weekend everyone!

Enter our Gone To China Contest to win a copy of the soundtrack & a poster!