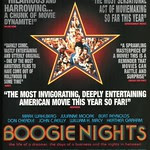 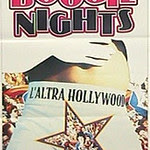 Boogie Nights follows an extended family of filmmakers who struggle to redefine and revolutionize the adult entertainment industry. Led by an idealistic producer (Burt Reynolds) who dreams of elevating his craft into an art form, this film takes a behind-the-scenes journey into the turbulent lives of those who rise and fall in a misunderstood underworld.

"Boogie Nights takes on the adult entertainment industry the way Goodfellas explored organized crime or The Player exposed the cutthroat nature of studio politics," explains Michael DeLuca, President and Chief Operating Officer of New Line Productions. "The script had such a well-crafted canvas of characters, we were able to lure actors who might not have ordinarily considered this kind of provocative material."

The film also captures an authentic snapshot of Los Angeles during the late 1970s and early 1980s -- an era when disco and drugs were in vogue, fashion was in flux and the party never seemed to stop.

This unique time in American pop-cultural history attracted writer/director Anderson. "The story takes place from 1977 to 1984, and I have very specific memories of the way Los Angeles looked and felt," Anderson explains. "The story dictated the time, and it just happened to set itself in a wonderful period of music and fashion," he says. Attention was paid to the most minute details regarding the music, costumes, hairstyles and dance moves. "It was tricky just keeping track and monitoring the time lines," says the 26-year-old filmmaker.

Anderson set out to write a story that had a large and complicated cast of characters, which proved to be a challenge because of the enormity of the project. But at the same time, completing the feat on schedule with a modest budget was his greatest reward.

At the heart of the story is how the various players in an adult film production company come together to form a makeshift family -- comically dysfunctional in many ways -- but a family nonetheless. Their lives are intertwined in shared experiences that range from the successful highs to the brooding lows. "These characters are all searching for their dignity. They're just trying to find themselves," says Anderson.

The main character, Eddie Adams, who changes his name to Dirk Diggler, is played by Mark Wahlberg, who knew immediately upon reading Anderson's script that he wanted the role. "I put the script down and thought, 'Well this guy is a genius.' He's telling a story here that is so funny, disturbing and totally original, it's wonderful," says Wahlberg. With that in mind, he joined the project with complete trust in Anderson's vision.

"This is a difficult story to tell. People are scared of this material," says Wahlberg, whose character becomes seduced by the "glamour" of the adult entertainment industry.

Wahlberg saw his role as an acute departure from his other on-screen personas. "People put you in a category, and you can get stuck there. I was fortunate to get this part so I can step out and do something different," says Wahlberg. "Dirk's a very young, uneducated, innocent, gullible kid. He's just looking for love and finds it in this weird situation."

"Jack doesn't think he's a filmmaker. He knows he's a filmmaker. And he knows how to get the best from his actors," says Reynolds. "I knew a lot of guys like Jack. He's very giving, and in a strange way, he's a hell of a good friend."

Playing the adult entertainment superstar Amber Waves, Julianne Moore sees Boogie Nights as "A film about the pursuit of stardom and the notion that it's inherently interesting to be a star no matter what the cost." Moore, who was drawn to the story immediately, adds, "I think people will be interested in the flawed nature of these people and how they're still trying to achieve something. One of the things Paul did so wonderfully was to present this world and allow you to make your own judgments about it."

Describing her character, Moore says, "Amber is fairly representative of the adult film actresses in that time period. She's given up all ties to anything else; she's completely immersed in this world. Even though Amber is seen as someone who is free, she has paid a high price for her lifestyle."

Working with two male icons at different ends of the spectrum, Moore observes, "Mark plays Dirk in such a refreshing and emotional manner. He's just very magnetic and charismatic in the part. With Burt, it was interesting to have an actor around who's had his level of experience in our industry playing this authority figure in the film. He's really remarkable in the role."

Heather Graham plays Rollergirl, who, like Dirk, is a child in this flawed family with Jack and Amber as substitute parents. "Hopefully, people will watch this film and get past the shock value, because it's a very human story," says Graham.

Boogie Nights marks the third time John C. Reilly, who stars as Reed Rothchild, has worked with Anderson. "Despite the sprawling nature of this story, you still get a real feel for each character, their individual quirks, personalities, weaknesses and strengths," he says. "Paul is real, and he's very frank. He doesn't fill in a lot between the lines."

For Hoffman, Boogie Nights is "a film about people who are outside the realm of society, who are trying their best to be accepted. I think most people will probably be fascinated by the film because of the '70s. It was an awkward stage in America."

A character also wrapped up in the awkwardness of the '70s is Buck Swope, played by Don Cheadle. Buck goes through many fashion changes ranging from the "Midnight Cowboy" look to the "Commodores" style of clothing. According to Cheadle, "He doesn't stay in one look long enough for it to really manifest because he's constantly searching for his identity. Buck finds the acceptance he is desperately seeking in this 'family'."

For Cheadle, one of the most memorable aspects of Boogie Nights was the unique atmosphere on the set. He says, "Paul is one of the few directors I've worked with who doesn't say 'action' every time. Sometimes the camera just starts rolling, and he lets you go. It was very loose."

William H. Macy, who plays Little Bill, agrees and adds, "Paul's shots are wonderfully well-chosen because all of them tell the story. He's got a great eye, and he loves actors." Macy also points out that Boogie Nights is one of the healthiest sets he's ever worked on in terms of handling sex scenes. "It was truly refreshing and amazing that no one was embarrassed. Everyone was really candid on the set because we were dealing with this subject of sex as a business."

Looking back on the `70s, Macy remembers, "For just a nanosecond, people actually thought adult entertainment was going to become a legitimate art form. Boogie Nights is a microcosm of that period of that time."

Macy's character is the older soul trying to be the moral conscience in an awkward world. He says, "My character's take on everything is, 'Isn't this a little odd? Does anybody else think that what we are doing is nuts?'" However, Macy sees that Little Bill's main flaw is his unwillingness to stand up for what he knows is wrong, and that makes him very repressed. "He lets it build up until it comes out violently. What happens with Little Bill is a great metaphor for the whole country," explains Macy.

To create the look for Boogie Nights, Anderson turned to costume designer Mark Bridges for his expertise. Says Bridges, "This is a big nostalgia piece. I went for a slick, sexy look that epitomizes the late '70s. I looked through yearbooks and photo albums to try and remember the high points style wise, as well as the fashion milestones over the seven year period the film covers." Finding the right clothes took a lot of time and research. According to Bridges, "It's sort of a treasure hunt. It's been a little difficult because the '70s look is so popular now, and so the vintage stores in Los Angeles are really bare. I visited a combination of thrift stores, vintage shops and garage sales."

Choreographer Adam Shankman was brought in to teach the actors the accurate dance steps of that time. "This kind of dancing is so ingrained into the American consciousness. It's such a dear part of our history. Nothing really says 1970's like disco dancing."

Principal photography on Boogie Nights commenced on July 10, 1996 and was completed on October 4, 1996.


Some of the influences on the script include: John Holmes, Shauna Grant, Corey Feldman, Corey Haim, David Hasselhoff, etc.

Leonardo DiCaprio was his first choice to play Dirk Diggler but he decided to do Titanic instead. Mark Wahlberg impressed him when he saw The Basketball Diaries & Fear.

Samuel L. Jackson was originally offered the role of Buck Swope but he just didn't get it & passed.

Tracking shot which follows the cast around & into Jack's pool was inspired by the film I Am Cuba.

New Line had originally planned on opening the movie in May 1997 as counter- programming to Steven Spielberg's The Lost World. MPAA problems & Paul helped nix that idea.

Paul had always thought the subtitle/tagline of the movie should be "It's all fun and games until somebody gets hurt."

Veronica Hart (The Judge) along with Georgina Spelvin & Seka were the main inspirations for Amber Waves.

During the wedding reception scene, Jesse says, "I've never been to Las Vegas." and Buck replies, "Have you ever been to Niagra falls?" A nod to Hard Eight?

Many of the sequences for the films & the documentary footage was "inspired" by Julia St. Vincent's documentary, Exhausted: The John C. Holmes Story. Here's a few stills that might look familiar. One. Two.

Boogie was shown at the 7th Annual International Oslo Film Festival in Norway in November 1997.

According to Premiere Magazine (5/98), Ted Turner & Jane Fonda sent a personalized note to Paul expressing how much they loved the film.

Here's a nice breakdown of the opening tracking shot courtesy of those fine folks at Empire Magazine (U.K.).

Boogie Nights premiered on the FX Channel on July 9, 2000. PTA & his editor, Dylan Tichenor cut the TV version. All nudity was handled with strategically placed graphics. Much of the profanity was left intact or simply bleeped out (instead of being dubbed). Although it was not letterboxed, PTA was extremely happy with the presentation.

You can also check out my comparison of the Theatrical version to an early Workprint version of the film which also contains many extras bits not listed above.